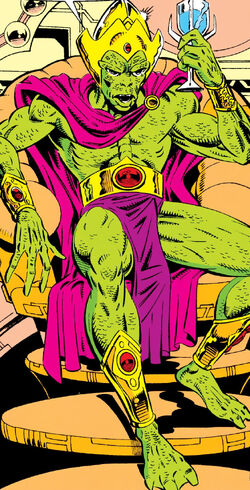 Brother Royal was leader of the Brotherhood of Badoon. He led the Badoon in an attempt at conquest of Earth which was foiled by the Silver Surfer.[1]

When the Badoon later created massive concentration camps, the Guardians of the Galaxy interfered and and started freeing the prisoners. They managed to capture their leader, Star Lord. He tried to execute him by forcing him to battle the Monsters of Badoon, which had managed to hold their ground against the Silver Surfer. However, the Guardians arrived with an army of freed prisoners and slaves, and destroyed the Badoon Capital. Angela then proceeded to decapitate Brother Royal and announced that they were all free.[2]

Traditional strength and abilities of the Badoon species.

Access to the full technology of the Badoon empire.

Like this? Let us know!
Retrieved from "https://marvel.fandom.com/wiki/Brother_Royal_(Earth-616)?oldid=5076971"
Community content is available under CC-BY-SA unless otherwise noted.