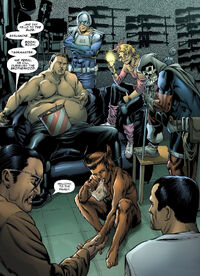 Origin
A special task force launched by the FBI in order to control super-powered groups of humans.

With organized crime increasing in New York City, the FBI organized a strike force, mostly composed of mutants, to crack down on organized crime. The Brotherhood's only Sapien member was Frank Castle, dubbed by the media as "The Punisher" for his involvement in taking down a number of criminals that threatened his family, was recruited to show that they were not prejudiced against his kind. Though the Brotherhood brought down a number of crime syndicates, the one they couldn't get to was Luke Cage and the Avengers, a group of Sapiens fighting for their dying species' rights. The Brotherhood couldn't take any legal action against the Avengers and their foe in turn exposed Taskmaster as an enhanced Sapien and helped Castle, who was growing weary of the Brotherhood's brutality, escape to Wakanda. Therefore, Thunderbird made a pact with Kingpin, who was in alliance with the Avengers, to take down all Sapien groups in New York.

Eventually, the Brotherhood, along with the Kingpin's enforcers, made their move to take down all the Sapien groups simultaneously, before anyone else could run to Wakanda. But the Avengers managed to avoid arrest and paid Kingpin a visit. Afterwards, the Brotherhood began a purge of Sapien Town, not only to arrest any criminals, but to tear the place apart and convince all the Sapiens that their lines were hopeless. They soon came into conflict with the Avengers, who freed their fellow Sapiens from custody. Ultimately, the latter became victorious and restored the spirit of the Sapiens.

The next day, it became apparent to everyone that the Brotherhood was guilty of criminal activity. Magneto had the Brotherhood dissolved and reassigned, while having Thunderbird on paid leave pending investigation.

Retrieved from "https://marvel.fandom.com/wiki/Brotherhood_(Earth-58163)?oldid=5545385"
Community content is available under CC-BY-SA unless otherwise noted.