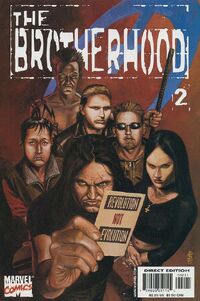 The Brotherhood is a global network of terrorist cells acting against mutant persecution. At the beginning, it was founded by Marvin Hoffman, Orwell and Marshal, but this last quit, facing Hoffman's lead, disillusioned, and join a governmental agency to take down the Brotherhood.[1]

Led by Marvin Hoffman, who took the name of X, they possess numerous cells or active members in London,[3] Moscow,[4] Bogota,[5] France,[9] United States of America,[10][6] Bangkok,[8] Rome,[8] Tokyo (described as the pride of the movement),[7] Brazil[7] and North America.[7] From the outside, Marshal tracked X and the Brotherhood, but Orwell keep him from takes Hoffman down, as he wanted to make the things get right. This period last for five years.[1]

In New York, Mikey Asher was recruited by Fagin, Orwell, Oswald, Marabeth, after a few meetings, the intervention of the Brotherhood in an incoming firing at Mikey's school and the demonstration of the government felony, having Red Cross' staff operating mutant-screening.[11]

At some point, the London Cell, comprised of Bryson Bale, Bela, Fiona Dunn, Clive Vickers was tasked to abduct and recruit Malon Reeves. Once done, they intend to took down her father, the secretly mutant Malcolm Reeves,'s empire down, because of his anti-mutant engagement. Mikey and Fagin were send to join them. Still, they were followed by Marshall, who torture and seemingly killed Fiona and Bela in order to get intel on X.

Fall of the Brotherhood

The London Cell fall, as Mikey and Fagin were send away by Bryson, and this one sacrificed himself to kill Malon's father. The last remaining member, Malon was then approached by Marshall,[12] and was imprisoned with Mikey and Fagin, captured at some point by Marshal.[8]

At the same time, the cells of Rome and Bangkok fell too, taken down by the Feds, and rumors started to spread that the Revolution was dying.[8] During a rally in Philadelphia, a massive riot exploded between X's supporters and the police forces.

Later, the Brotherhood Cells of Tokyo, Brazil and North America were respectively attacked by X-Force, the X-Men and Cable. Charles Xavier himself was taking care of the Brotherhood moles.

Mikey, Fagin and Malon were released by Marshal to infiltrate the Brotherhood for him, after having them convinced that X was nothing more than a megalomaniac and selfish person. The three took down Dick/Jane Smythe, a metamorph member of the Brotherhood, on X's orders, as she was giving intel to an enemy faction (who was not Marshal's one, contrary to what X though). They then put her secretly in custody of Marshal's agency, and came back to X, presenting themselves as successful. The team then decide to hit X-Force, as they represented the alliance of some mutants to the system, and choose as target Doop, the heart of the team. This action was also in order to send a message to mutankind: Or they were with the Brotherhood, or they were against them.[7])

For this strike, the remaining Cells members were gathered in New York, where X-Force were acclaimed for their hit on the Tokyo Cell. A fight started between X-Force and the Brotherhood, during which the three traitors were seemingly killed by X-Force, trying to explain themselves. X had Marshall captured but this one revealed his plan, and so the last traitor, Orwell, revealed himself as well. By hearing Marshal's plan, who intended to rally to himself a healthier Brotherhood with him as the leader X, Hoffman fire his powers, but hit Orwell.

Mikey Asher, fatally wounded by X-Force, manage to create a trail with his explosive blood, and killed the two former friends and wannabe-leaders of the Revolution.

As the Orphan asked what was just happened there, U-Go-Girl answered it was the end of the Revolution, and after a silence, X-Force left the devastated street.[1]

Retrieved from "https://marvel.fandom.com/wiki/Brotherhood_(Earth-616)?oldid=5687014"
Community content is available under CC-BY-SA unless otherwise noted.