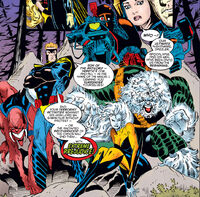 Base of Operations
New York
Affiliations

The Brotherhood of Chaos were a group of powerful mutants loyal to Apocalypse that were enforcers for the Madri. They were sent to attempt to stop the Sentinel evacuation of surviving humans in North America. There they attempted to stop the X-Men by altering the computer virus that was supposed to make the Sentinels consider the X-Men allies.[1] Despite this, the X-Men succeeded and members Arclight, Spyne, and Yeti were reported as being "dealt with" by Iceman. Whether they were killed or merely defeated remains unrevealed.[2] Members Box and Copycat managed to smuggle themselves aboard the extraction vessels and sneak into Europe. They were discovered and killed by Weapon X (Logan) and Jean Grey.[3]

Retrieved from "https://marvel.fandom.com/wiki/Brotherhood_of_Chaos_(Earth-295)?oldid=5545394"
Community content is available under CC-BY-SA unless otherwise noted.