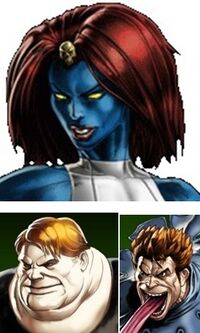 The Brotherhood of Evil Mutants was founded by Magneto as a group dedicated to demonstrate the superiority of mutants over humans. From that first team the only member that was still loyal to the Brotherhood was Toad after the departure of Magneto and Rogue to join the X-Men and Quicksilver who joined the Avengers with his sister.

Later, the Brotherhood was led by Mystique into joining other evil groups such as Hydra and A.I.M. into the Syndicate, a group created to extract power from the Isotope-8 and fight the Alliance.[1]

Retrieved from "https://marvel.fandom.com/wiki/Brotherhood_of_Evil_Mutants_(Earth-12131)?oldid=4115991"
Community content is available under CC-BY-SA unless otherwise noted.