The Brotherhood of Mutants 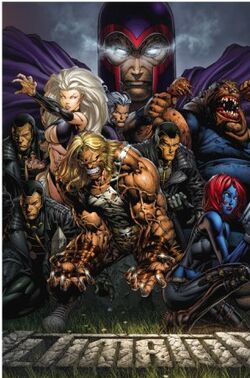 Eight years ago, Erik Lensherr and Charles Xavier shared a dream - a dream to create a safe haven for mutants. Three years later they started to build a complex in a remote jungle situated in Antarctica called The Savage Land.

Two years after that Lensherr's - now known as Magneto - and Xavier's opinions about the futures of man and mutantkind differed so drastically that their ideological disputes turned to violence. Magneto used his mutant powers to throw a metal pole at Xavier, hitting Xavier in the spine, permanently crippling him. Three weeks after the clash the newly-formed Brotherhood of Mutant Supremacy made its first terrorist attack, its target was the Pentagon. The Savage Land Complex became the Brotherhood's first headquarters.

Magneto's sent his elite assassin Logan to infiltrate the X-Men and assassinate Professor Xavier. He was accepted into their ranks, and quickly seduced Jean Grey in order to further entrench himself within the team. However, Wolverine accidentally fell in love with Jean, and was devastated when she left him upon discovering his connection to the Brotherhood. Scott was heartbroken. Cyclops and Xavier had planned to send Cyclops to infiltrate Magneto's Brotherhood of Mutant Supremacy, and Jean and Wolverine's affair provided a convenient excuse for Scott's departure. During his time with the Brotherhood of Mutant Supremacy, Magneto considered Scott a potential heir and urged him to pursue a relationship with the Scarlet Witch.

American authorities located the Savage Land and launched a massive Sentinel attack, but Magneto used his powers to reprogram them, leading them back to assault Washington. Scott warned Xavier of Magneto's plan to destroy Washington, D.C. with a fleet of reprogrammed Sentinels. While the Sentinels decimated the capital, Magneto dragged the President naked on to the White House lawn. The X-Men intervened, and Magneto was defeated when his son Pietro, convinced that genocide was going too far, removed his helmet, leaving him vulnerable to Xavier's powers. Xavier claimed to have killed Magneto, but had instead secretly brainwashed him, hoping to rehabilitate him.

The Brotherhood participated in the rescue of the X-Men from Weapon X. Though offered a place on the X-Men, former Weapon X captives Rogue and Juggernaut joined the Brotherhood.

Many members of the Brotherhood, including Magneto, perished during or following the events of Ultimatum, leaving Sabretooth and Mystique the only known survivors, led by a vengeful Quicksilver.

Acolytes are equipped with basic weapons.

Magneto and Forge have created some highly advanced vehicles used both during their terrorist attacks and in The Savage Land.

Retrieved from "https://marvel.fandom.com/wiki/Brotherhood_of_Mutant_Supremacy_(Earth-1610)?oldid=5547251"
Community content is available under CC-BY-SA unless otherwise noted.