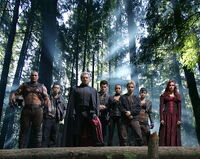 The Brotherhood of Mutants was created in 1962[1][2] by the mutants Magneto and Mystique in direct opposition to their old friend Charles Xavier's X-Men. Whereas Xavier sought for a peaceful co-existence between mutants and humans, Magneto's beliefs, influenced by his imprisonment and the death of his family in a Nazi concentration camp, were that humans would never accept mutants as equals and would turn on them, lashing out in anger and fear just as the Nazis had done. His solution was that if humans could not accept them into their society then they would create their own. Thus, the Brotherhood was born.

The two created the Brotherhood by taking in members of the much more radical Hellfire Club following its leader's death. The group was originally made up of Magneto, Mystique, Emma Frost, Azazel, Riptide, and Angel.[1] The group added a member named Tempest a short time later.[2]

Over the next decade, most of the members of the Brotherhood were killed off. Azazel and Tempest were killed in July 1963 after ambushing members of Project: Wideawake.[2] Angel and Emma Frost were also killed, and autopsies were performed on their bodies by Trask Industries.[3] The group subsequently disbanded, but was later reformed by Magneto and Mystique.

Over the next three decades, the roster continuously changed its size and composition. By the early 21st Century, the Brotherhood only consisted of four members: Magneto, Mystique, Sabretooth and Toad. At this point, Magneto had somehow built a machine that would activate mutations in normal humans that was powered by Magneto himself. The Brotherhood first tested this machine on Robert Kelly, a United States Senator and lead proponent of a mutant registration bill. However, the machine put a huge strain on the elderly Magneto, so the Brotherhood set their sights on Rogue, a mutant who could absorb the abilities of other mutants with only a touch who had recently come under the protection of the X-Men, so she could power the machine in Magneto's place. The Brotherhood captured her at a train station after she ran away from Xavier's mansion. They then set up their machine at the top of the Statue of Liberty, planning to use the machine to mutate the world leaders gathered for a summit on Ellis Island. The X-Men Cyclops, Jean Grey, Storm, and Wolverine climbed the Statue of Liberty, defeating the Brotherhood's members in the process, and put an end to Magneto's plan. While the fates of Sabretooth and Toad were left unknown and Magneto was apprehended, Mystique escaped to disguise herself as the now-deceased Senator Kelly and oppose the mutant registration bill.[4]

Retrieved from "https://marvel.fandom.com/wiki/Brotherhood_of_Mutants_(Earth-10005)?oldid=5675072"
Community content is available under CC-BY-SA unless otherwise noted.