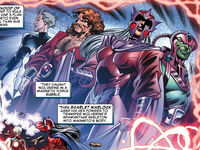 The Brotherhood of Mutants would attempt to take over the Earth by making Magneto even more than she already was. They would attempt this by trapping Wolverine inside a magnetic force bubble and have Scarlet Warlock use his hex powers to transfer Wolverine's adamantium skeleton into Magneto's body. However, the hex failed and instead combined Wolverine, Magneto, Scarlet Warlock, Quicksilver and Mesmero into a single entity known as Brother Mutant.[1]

Retrieved from "https://marvel.fandom.com/wiki/Brotherhood_of_Mutants_(Earth-127)?oldid=4246115"
Community content is available under CC-BY-SA unless otherwise noted.