Brotherhood of Those Who Will Inherit The Earth 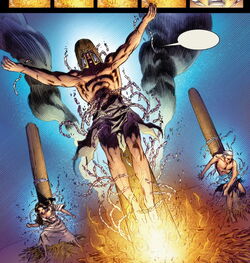 The Brotherhood of Those Who Will Inherit The Earth was founded by Grand Inquisitor Enrique composed of Witchbreed (mutants) that could pass for humans, witchbreed with visible mutations were killed.

After Toad, their spy at the Vatican, betrays the fact that they have been sheltering any 'Witchbreed' that can hide their powers, Enrique and his children escape being burnt at the stake, capture Toad, and sail to America. After a brief encounter with Carlos Javier in which Roberto Trefusis freezes their ship in the middle of the ocean, Enrique agrees to work with the other heroes. When the world is saved, Enrique departs, entrusting Wanda and Petros to Javier, and instructing him to take care of them until he returns, and never to tell them that they are his children.

Like this? Let us know!
Retrieved from "https://marvel.fandom.com/wiki/Brotherhood_of_Those_Who_Will_Inherit_The_Earth_(Earth-311)?oldid=5545514"
Community content is available under CC-BY-SA unless otherwise noted.