Brotherhood of the Shield 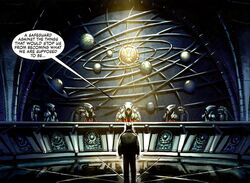 The Brotherhood of the Shield is an ancient organization created to keep Earth safe. They have recruited the best minds and warriors throughout history.[3]

The group has ties leading back to the early dynasties of Ancient Egypt. Imhotep created the organization by assembling the Immortal mutant Apocalypse and the Moon Knight against the alien invasion of the Brood in 2620 BC.[3][1]

An ally of the brotherhood, Zhang Heng, convinced the Celestial Madonna into using the sun to give birth to its child instead of destroying the Earth or the Moon to acquire the necessary energy for the process to be carried on.[3]

In 750 A.D. Baghdad, Jabir ibn Hayyan, then-leader of the Brotherhood, conceived of a way to keep the world from ever ending. He built a machine that would take the sum total of the hopes, dreams, inspirations and desires of a thousand men a give it to a single man. This man could then recreate the world whenever it was threatened. The machine, however, drained the men of their lifeforces and the machine failed. Without a thousand of the Brotherhood of the Shield around to shape the world, Man fell into an age of darkness.[5]

Michelangelo was born in 1475 Caprese near Arezzo, Tuscany in Italy. He grew up to become one of the greatest artists of the Renaissance. He was brilliant and talented in many ways; he could paint, sculpt, design buildings, and write poetry. He is best known for his sculptures and frescos. However, two years after he was born, 'Infinity washed over him' and he simultaneously began to exist at all times, from the beginning of man to the end of the world. After many years of work he faked his own death to continue his career as the Forever Man.[6]

Galileo later battled the devourer of worlds Galactus. Leonardo da Vinci was also a prominent member inventing a mysterious device which allows him to travel off in an ornithopter. One of the longest reigning leaders of the group was Sir Isaac Newton, who kept his position by murdering Galileo and many others across the centuries. He also tortured Nostradamus to learn future events.[3]

Sir Isaac Newton was recruited into the Brotherhood, and mentored by Galileo. Isaac traveled to Ashomia, the Deviant city, in 1625. There he was captured. The Deviant ruler found his DNA interesting and had him mate with a Deviant woman named Morda. He lived among the Deviants until he could steal the secret knowledge contained in their holy book, claiming it for the Brotherhood. He called this knowledge the "Hidden Arts", saying it wasn't science, but "something sideways... something bent... refracted. Something alien and devout." This knowledge became permanently written in his skin. He burned the city down and escaped.[5] Newton later discovered the "The Secret Alchemy," which used the Elixir of Life and allowed him to live forever. He captured Nostradamus in 1652, and made him immortal as well, using him as a seer and forcing him to reveal visions of the future. Immortality also gave Isaac clarity of thought, and he discovered the "Quiet Math," which was the "divine structure for ultimate deduction." Using this, he determined that the world would end in 2060. This knowledge he called the "Silent Truth". Armed with the Silent Truth, he knew the old ways of the Brotherhood had to change, so he murdered Galileo and took control of the Brotherhood.[5]

Nostradamus predicted the American Revolutionary War and Benjamin Franklin was an agent during this time.[7]

Nostradamus predicted the battle of the Alamo during the Texas Revolution and the Brotherhood of the Shield sent an agent to help in the cause.[7]

Back in 1953 just after the death of Joseph Stalin, the leader of the Soviet Union, two prominent S.H.I.E.L.D. agents, billionaire industrialist Howard Stark and scientist Dr. Nathaniel Richards, recruited a mysterious young man named Leonid, who possessed amazing superhuman powers. They took the powerful young man to the Brotherhood of the Shield High Council in the Immortal City under Rome. The High Council revealed they were aware of the "The Final Fate of Man," and they had appointed themselves the task of protecting the Earth until that event. They revealed to Leonid that he has a destiny to help in their endeavor.

Leonid spends three years working with the group before being visited by adopted father the Nikola Tesla aka the Night Machine. He had battled against the Shield in the past but was apparently been killed by them. He gives his son the key to a secret area of the headquarters, saying his destiny cannot be dictated by others. The famed artist Michelangelo was also the Forever Man who possesed powers to manipulate space and time. Night Machine received his cybernetic implants from the Forever Man. It was through this they discovered that Leonid's biological father was Sir Isaac Newton.

Leonid met Leonardo da Vinci, who has apparently traveled through time to use his device to save the world. Da Vinci's return was met with resistance from Sir Isaac Newton who saw it as a threat to his reign as leader of the organization. This eventually led to the organization splitting into two factions; one led by Newton and one led by Da Vinci. The child of a Celestial, the Star Child, was picked up by Da Vinci from the sun.

Stark, Richards and Night Machine returned to the Immortal City, finding themselves in the battle, and stopped the two battling factions by putting the decision of leadership in to Leonid's hand on whom is right; he choose Da Vinci over Newton, who escaped into the future.

After Isaac Newton escaped in the future followed by the Celestial Star Child. Michelangelo, Leonardo da Vinci, Leonid, Nathaniel Richards, Howard Stark, Nostradamus, and Nikola Tesla awakened the Last Caliphate, and together, they used the Human Machine to travel to the future.[8]

Retrieved from "https://marvel.fandom.com/wiki/Brotherhood_of_the_Shield_(Earth-616)?oldid=5204067"
Community content is available under CC-BY-SA unless otherwise noted.