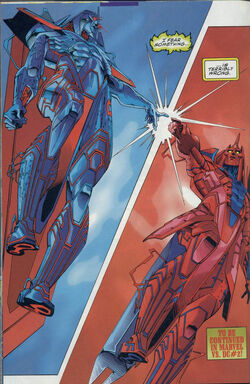 Instead of fighting, we should be finding a way to make those cosmic babies work and play nice together!

The Brothers are a pair of cosmic entities that each represent the DC Universe and the Marvel Universe. Being the physical embodiments of their respective Multiverses, both entities are shown as being so immensely powerful that even the Living Tribunal and the Spectre were beneath their notice.[2]

During the final days of the Sixth Infinity, the Living Tribunal created the Brothers, consulting the Spectre in doing so. Once the Multiverse was restored in its seventh iteration, he released the Brothers to serve their pre-destined roles as architects of new realities.[3]

The entities are called "Brothers", though they are also sisters, sexless, and everything in between.[1] In the beginning of their existence, the Brothers encompassed the whole of everything. They encompassed everything except each other. They could not accept this lack of uniqueness and fought each other. They unleashed forces which ended the whole of creation and then restarted it. In this explosion of death and rebirth, the Brothers were blasted apart. Their shattered essence fractured the new-born universe into a Multiverse. Fragments of their essence blew in all directions. As the new universe (or universes) expanded, so did the fragments of the Brothers.[1]

In the process of their fragmentation, the Brothers lost their sense of consciousness and identity. It took them eons just to remember that they had a consciousness of their own. They had to think before they could be. As they had forgotten their own identity, their memory of each other vanished. A long-time later, a series of cosmos-shaking events tore the fabric of reality and redefined reality. The events allowed the Brothers to rediscover each other. They realized they were no longer a singular entity ("Me"), but two of them ("Us").[1]

Once again, the Brothers had trouble accepting their own lack of uniqueness. They also discovered that their current forms were incomplete. Their original battle had caused parts of each Brother to end up in the other one's universe. Each Brother desired to be whole and unique, but the existence of the other denied them that chance. While tempted to fight each other again, they realized that a head-to-head struggle would be futile and end with no winner.[1]

While seeking a solution to their problem, the Brothers observed the existence of their respective cosmic guardians: the Spectre and the Living Tribunal. This gave them an idea about a possible solution to their problem. Instead of directly fighting each other, they would choose super-powered beings as their representative champions and have them fight in their name. Each Brother was convinced that his respective universe was superior to the one of the other Brother. The battle of the champions would determine which was actually the superior universe and Brother.[1]

They realized that there would be some problems in determining the victor of such a battle. Some of their champions were powerful enough to provide for unending battles with no obvious winner. So the Brothers set up a single rule. The champion who managed to immobilize his/her opponent first, would be the victor of their battle. The idea was similar to pinning one's opponent in wrestling. The side which lost the most matches would vanish forever, leaving behind the victorious Brother and his universe.[1]

Another rule that the Brothers set was that their champions would wait until summoned by the Brothers themselves to fight. Both the time and place of each battle would be chosen by the Brothers, not the actual fighters. The champions could not refuse joining the battle, because their refusal would cause the Brothers to go to war again. In that case, instead of a single universe dying, the Multiverse itself would die.[1]

The battle between Marvel and DC champions technically ended with 6 to 5 victory for the Marvel side. The 6 Marvel victors were Thor, Silver Surfer, Elektra, Wolverine, Storm, and Spider-Man. The 5 DC victors were the Flash, Aquaman, Robin, Superman, and Batman. However the red Brother was unable to claim his victory. The Brothers touched and merged into a single being. Their universes consequently merged into a new one, the Amalgam Universe.[2]

The merger of the Brothers turned out to be temporary and they regained their unique identities. They fought each other directly, until they were able to examine the origins and motivations of Batman and Captain America. They learned something useful from these heroes. Each hero had started out alone and eventually fought alongside many allies, but they had never lost their uniqueness. The Brothers decided they could co-exist after all. They shook hands and congratulated each other for having done well.[4]

Beyond the likes of the Spectre and the Living Tribunal.

Beyond the likes of the Spectre and the Living Tribunal.

Like this? Let us know!
Retrieved from "https://marvel.fandom.com/wiki/Brothers_(Megaverse)?oldid=6438783"
Community content is available under CC-BY-SA unless otherwise noted.