Brothers of the New World 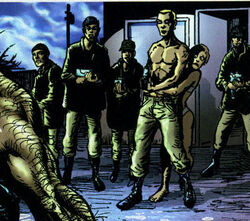 The Brothers of the New World were a cult that bought some land 60 miles from Westfall, out in the desert. The Brothers said that they were going to live off the land and were led by Cry who had a thing for girls. The group didn't kidnap any girls, the girls simply disappeared. In their pocket was the corrupt Sheriff Dennis Terril who helped make girls disappear. Anyone in the town that made any problems for them, was assaulted and given a warning.[1]

In the heavily guarded walled compound, the cult kept a "harem" of missing girls. The ATF agent Cassie Lathrop who had been investigating and was jumped, was added to the group. Except for one recently added girl (who had been missing for a month), all the others had "Stockholm Syndrome".[2] Wolverine tracked down the Brothers to their compound, seeking revenge for the death of Lucy Braddock, a girl who escaped the Brothers. He snuck into the compound and slaughtered them all the Brothers, killing Cry last.[3]

Like this? Let us know!
Retrieved from "https://marvel.fandom.com/wiki/Brothers_of_the_New_World_(Earth-616)?oldid=5604187"
Community content is available under CC-BY-SA unless otherwise noted.