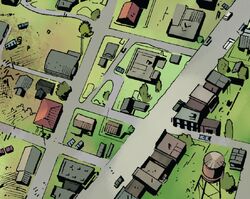 Broxton is a small town in Caddo County, Oklahoma in the United States of America.

Thor, after his rebirth, had recreated the City of Asgard close to the town about a couple of miles out, making it the new home to the Asgardians for some time.[2] He later raised it to float a few feet above the ground and paid for the land with some asgardian treasure.[3]

Was the stage of a war between Galactus and the asgardians over the Galactus Seed in asgard. It was the Pastor Mike who proposed a solution to the crisis in exchange for his own freedom.[4]

Where the serpent was finally killed.

With the wave of investments of Roxxon spearheaded by the new CEO, Broxton was quickly being rendered uninhabitable.

With the Asgardians leaving, they left an everlasting fountain and bountiful tree. Thor personally left his Asgardia home of Bilskirnir there for the remaining residents.[1]

Like this? Let us know!
Retrieved from "https://marvel.fandom.com/wiki/Broxton?oldid=6510003"
Community content is available under CC-BY-SA unless otherwise noted.