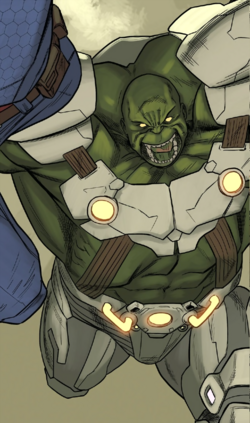 This Earth's Hulk was seen during flashbacks of past events,[1] and was also used as part of a holographic training program in the Danger Room with his fellow Avengers against the students at the New Charles Xavier School. Hulk targeted the mutant Hijack after he tried to gain control of Iron Man's armor with his techno abilities. The brawl continued until the session was turned off due to fellow student Triage's dislike of who they were fighting.[2]

Like this? Let us know!
Retrieved from "https://marvel.fandom.com/wiki/Bruce_Banner_(Earth-14923)?oldid=5217068"
Community content is available under CC-BY-SA unless otherwise noted.