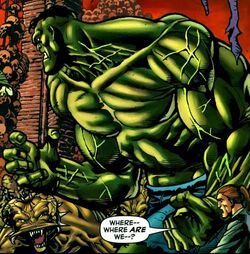 The past history of Bruce Banner of Earth-617 mirrored that of his Earth-616 counterpart up until he attempted a treatment from Doc Samson, by which Samson hoped to cure Bruce of his condition. Samson used a dual headset which he claimed would allow both patient and therapist to access the same symbol space, that is, the human subconscious itself. Believing Bruce's condition to be essentially a form of multiple personality dissorder, it was Samson's hope that he and Bruce would confront Bruce's greatest fears and conquer them, undercutting the root of the Hulk's awesome rage.

Unfortunately, when Banner was confronted by his subconscious fears, his father's abuse, General "Thunderbolt" Ross' contempt, and Betty Ross' scorn, the Hulk personality emerged and in his rage tore a whole through the fabric of the plane itself.

Finding himself in the Nightmare Realm, the Hulk came face-to-face with Nightmare. When the Hulk attacked, Nightmare asserted his dominance within his realm by forcing the Hulk to choke himself to death.[1]

Seemingly those of Bruce Banner (Earth-616)#Powers.

Seemingly those of Bruce Banner (Earth-616)#Abilities.

Like this? Let us know!
Retrieved from "https://marvel.fandom.com/wiki/Bruce_Banner_(Earth-617)?oldid=5781029"
Community content is available under CC-BY-SA unless otherwise noted.