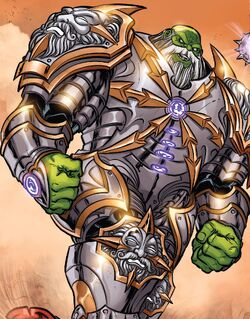 Maestro was the baron of Dystopia, ruling it with an iron fist and exiling anyone who opposed him to Greenland. The only real opposition to his rule was a band of rebels led by The Thing. Despite being the ruler of his own domain, Maestro secretly plotted to unseat God Emperor Doom and take his place as the All-Father and ruler of Battleworld.

Disguising himself as Odin, Maestro allowed himself to be found by Ruby Summers, who took him to the rebel hideout.[3] There, Maestro revealed his true identity and attacked the rebels. He engaged their leader, the Thing, in battle, and defeated him, taking him back to his palace.[4]

At his palace, Maestro made a proposition to the Thing. He asked for his aid in retrieving the Destroyer Armor, which Maestro would use to usurp Doom's position as All-Father, in exchange for which Thing would be allowed to rule Dystopia after Maestro left. The Thing, to the horror of his fellow rebels who had come to rescue him, accepted.[5]

The gang of unlikely allies traveled to Norseheim, where a book Maestro had stolen from Doom had said that Ulik the Troll, who knew the location of the Destroyer, would be. At an inn, they found Hoder, who informed them that Ulik could be found in Nornheim.

Upon entering Nornheim, they were immediately attacked by Ulik's horde of trolls. Maestro easily defeated Ulik, and forced him to tell him the location of the Destroyer armor. Ulik complied, and guided them to the Ancient One, who was the guardian of the Destroyer armor. To the Maestro's surprise, the Ancient One was none other than Rick Jones.[6]

Rick led them to the armor and told Maestro that he was free to put it on. Suspecting a trap, Maestro refused to believe that getting the armor could be that easy. Rick told him that it wasn't, as he had already summoned Doom to deal with Maestro. Maestro put on the armor just as Doom arrived. A fight ensued, which the Maestro won with little effort, going on to seize all of Battleworld and rule it as the new All-Father afterwards. Or so he would believe. There was indeed a trap: Nornheim trapped all those who attempted to take the armor in an illusion of their deepest wish. Maestro, reverting to his human form, would thus remain trapped in the illusion for all eternity.[7]

Maestro was freed from his illusion to help God Emperor Doom deal with a rising rebellion that was occurring in Battleworld.[8] Maestro arrived to bolster Doom's forces with an army of Hulks, but secretly intended to kill Doom after the rebels had been dealt with. His plans were made moot by the destruction of Battleworld after Mister Fantastic stole Doom's godly powers, and used them to rebuild the Multiverse.[9]

Pawn in the Contest of Champions

Due to the remains of Battleworld being the epicenter of the Multiversal renewal, this reality became rich in a substance known as Iso-8, created as the byproduct of creation itself.[10]

The remnants of Battleworld were discovered by the Elders of the Universe of the restored Earth-616 after realizing the Multiverse had endured a death and a rebirth. They resolved to fight for the possession of the Iso-8 in its concentrated and most powerful form, the ISO-Sphere, and decided to use the broken shell of Battleworld as the arena for their Contest of Champions, a competition where several individuals taken from the Multiverse fought to the death on behalf of each Elder. Maestro was one of these contestants, subjugated to the will of the Collector.[11]

Battles were waged, and the last two remaining competitors were Maestro and the Punisher, who fought on behalf of the Grandmaster. Unbeknownst to any of the Elders, Maestro and the Punisher began scheming to take down their masters. To do so, Maestro proposed an idea to determine the winner between the Collector and the Grandmaster, a new Contest of Champions, where Maestro and Punisher became their master's summoners, choosing new competitors from across the Multiverse.[12]

Summoner in the new Contest of Champions

While he had only acquired a small percentage of the ISO-Sphere compared to the Collector, the two portions of the object desired to become whole again, with only their owner's will preventing so. Maestro subsequently used his indomitable will to make Collector's portion of the ISO-Sphere abandon him, and obtain the object in its entirety.[12]

With the power of the entire ISO-Sphere in his hands, Maestro used it to put together the sundered fragments of Battleworld, restoring the planet to its previous form.[12] Using the ISO-Sphere and protoplasm, Maestro brought Rick Jones back to life as his first and only successful attempt at creating life.

Maestro's plans to continue the Contest with more players was endangered by the arrival of the Ultimates from Earth-616, who had investigated the disappearance of one of the Contest's former participants.[13] After subjugating the Symbioids, creatures created from the fusion of the deceased Void/Sentry with a Venom Symbiote, Maestro used the ISO-Sphere to swiftly return the Ultimates to their universe, and made them forget about the Contest.[14]

Soon after bringing in new contestants to Battleworld, Maestro was convinced by Rick Jones to confront them directly.[15] When Maesto did so, Jones revealed his true nature. He wasn't the Rick Jones that Maestro knew, but one of the deceased contestants, Stick, who had moved his life energy to the lifeless body which Maestro had created. Stick also used his abilities to merge the Symbioids into the Sentry. While the contestants and the Sentry took on Maestro, Stick directed Outlaw to snatch the ISO-Sphere from the villains' grasp.

With the ISO-Sphere in his hands, Outlaw's desire to use it to end the contest and bring the contestants back to their lives outpowered Maestro's. The ISO-Sphere was shattered, and Maestro was teleported to the Collector's museum, where he remained trapped behind a Sryllan Supernova-glass display case strong enough to hold him.[15]

Maestro is vindictive, ruthless, obsessive, power-hungry, sadistic, cruel, callous, sinister, and aggressive. The amalgamation of the Hulk's raw power and Bruce Banner's incredible intellect, Maestro suffers none of the internal conflict that he did in his younger days. Maestro is also impressively charismatic, manipulative, and persuasive, as he convinces Thing and his rebels to aid him, their greatest enemy, and is considered one of God-Doom's most loyal barons, despite plotting to destroy him. This version of the Maestro is somewhat more merciful and honorable to his enemies, and any who dares defy him, exiling them from their homes rather than killing them. Despite this, he is still insanely obsessed with absolute power, which led to his eventual godhood and his obtaining of the ISO-Sphere. However, it is his own arrogance and ego proved to be his downfall, which led to his current imprisonment in the Collector's Museum.

Seemingly those of the Maestro of Earth-9200.

Seemingly those of the Maestro of Earth-9200.

Twice as great as the Merged Hulk persona while in a calm state.

Arrogance, psychosis, and delusions of grandeur.

Like this? Let us know!
Retrieved from "https://marvel.fandom.com/wiki/Bruce_Banner_(Earth-69413)?oldid=5668764"
Community content is available under CC-BY-SA unless otherwise noted.