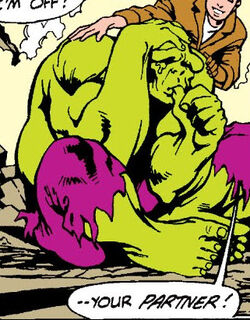 Puny human...better run away real quick! Or Hulk will smash!

At one point Hulk and Rick Jones were caught in a battle between the Avengers and a group of super villains. Hulk saw Captain Britain, and attacked him from behind. Britain, startled, punched the Hulk in the face. This caused the Hulk to start crying. Rick Jones was stunned that Britain would punch someone with the mind of a baby, and tried to comfort Hulk. Britain, disgusted with the whole thing, flew away.

Seemingly those of Earth-616's Hulk.

Like this? Let us know!
Retrieved from "https://marvel.fandom.com/wiki/Bruce_Banner_(Earth-8910)?oldid=5477862"
Community content is available under CC-BY-SA unless otherwise noted.