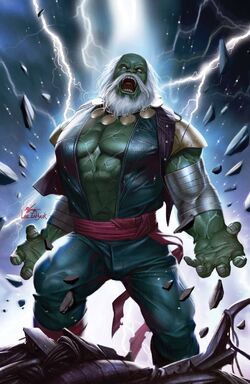 You're fighting against the inevitable, Hulk. I'm simply the final product of natural selection. The strong survive. I'm the strongest. I survived.

The Maestro was a version of the Hulk from an alternate future timeline, approximately a hundred years into the future, combining Banner's intelligence with the Hulk's more malevolent aspects. A nuclear war killed almost all of the Earth's superhumans, which was followed up by chemical attacks by the Black Scythe, bringing humankind to the brink of extinction. Bruce Banner survived the devastation by being kept in stasis by A.I.M. who hoped to use him and energy-based mutates to repopulate the world. Banner eventually escaped from A.I.M.'s compound.[2]

Hulk then traveled across what remained of the United States. When he arrived in Washington, D.C., he discovered a small community of survivors who were descended from employees that worked in the White House living in a bunker beneath the White House with Machine Man. That was when Hulk learned that what remained of New York City had been remade into the city of Dystopia and ruler by someone called Maestro. Curious about who Maestro was, Hulk journeyed to Dystopia and discovered that Maestro was the demigod Hercules.[1]

Hercules quickly got into a fight with Hulk to see if he still had his edge. After Hulk fell into an abandoned subway tunnel, he was approached by Dakord and Pizfiz friends of Rick Jones who sent him to meet with Jones. Hulk agreed and slipped away. He met with an elderly Rick in his trophy room full of artifacts from dead superheroes and villains. As the two old friends talked, Hulk shocked Rick by telling him that his journey through the ruined world caused him to become disenchanted with humans and that he wouldn't mind if Hercules wiped out everyone in Dystopia out.

Hulk then asked for a lab. Rick told Dakord to take Hulk to what remained of Alchemax. Hulk searched Alchemax's headquarters for days until he stumbled upon the building's cybernetics lab and a lab used to create numerous clones for unknown purposes. Months later, Hulk tried to rally the people of Dystopia to make him their ruler so they could rebuild civilization outside of Dystopia. In an attempt to convince them of what he was capable of, he showed him his Dogs of War, robotics dogs he created from what he found in Alchemax. When Dystopia's citizens blew him off, Hulk sent his Dogs of War to make them submit.[4]

Hercules entered the fray and fought off the Dogs of War. He then goaded Hulk into a fight and easily bested him. Hulk eventually submitted, and Hercules spared his life to make him a part of his entourage. Hulk however wanted to make amends, which was actually a ruse so he could plot against Hercules. Hulk vanished for a number of years before returning with the villain Vapor. He had Vapor seduce Hercules to get close to him so she could then kill him by transforming into arsine gas. Hulk then turned on Vapor by freezing her, shattering her into pieces, and having those pieces buried over a vast area so she could never regenerate.[5]

Hulk later held a funeral for Hercules. As he began cremating Hercules' body, he told Dystopia that he was their new ruler. Dystopia's citizens objected and stated that they wanted an election. Hulk attempted to make Dystopia submit with his Dogs of War, but he was attacked by some of Rick Jones' friends with a weapon created by Forge. Hulk easily fought them off, but suddenly, Hercules unexpectedly came back to life and easily overpowered Hulk. Before Hercules could kill Hulk, Hercules was killed by his minister with Forge's weapon who stated that he never liked him. Hulk then went to confront Rick about his friends' failed attempt to kill him but found Rick gone along with his artifacts. Rick then communicated with Hulk remotely, comparing him to his father before trying to kill him with a bomb. Hulk survived the explosion and became the new Maestro, seized control, and became the new ruler of Dystopia.[6][7]

Grey-haired and balding, the Maestro was clearly older than the Hulk but was also significantly stronger due to the radiation he absorbed since the war. He ruled the city of Dystopia, built to his own designs and protected by radiation shielding. Brutal soldiers with hi-tech equipment kept the "peace" and imposed the Maestro's iron will. The Maestro himself dwelt in a grand palace, where a bacchanalian atmosphere reigned.[8] Other gamma-irradiated beings, Shulk and the Abomination, survived the war, Shulk by unknown means and Abomination being kept in stasis by A.I.M.[2] Abomination eventually escaped from A.I.M.'s custody, and he and Shulk were mutated and strengthened by the nuclear fallout like Maestro. The pair teamed up to fight Maestro, but they were both defeated with Abomination losing a hand and eye and Shulk being kept in stasis for seven years. Abomination later went on to conquer another area of the world.[9]

Not long after the war, Rick Jones encountered the reality hopping mutant Proteus, who had possessed the body of an alternate reality Hulk from the year 2099. Proteus intended to discard his current body and possess the Maestro. Jones, unaware of his plan, provided a weapon created by Forge, which might have been able to kill Maestro. However, the plan failed when the Maestro was warned by the Exiles, who were pursuing Proteus. Proteus possessed a new host and fled to another world, breaking the Maestro's neck during his escape.[10]

Years later, the Maestro, fully recovered from his injury, encountered a time-traveling Genis-Vell and Spider-Man 2099. Manipulated by the supervillain Thanatos, the three battled, but Captain Marvel and Spider-Man eventually returned to their own time, with no consequences for the Maestro.[11]

Acquiring Doctor Doom's time machine, the rebels opposing the Maestro (led by Rick Jones) eventually decided to bring the "Professor" Hulk forward from the past, hoping that he could defeat Maestro. The Hulk agreed to help them and confronted the Maestro,[7] but lost due to the Maestro's greater experience, power, willingness to endanger bystanders, and his ability to predict the Hulk's moves in combat. The Maestro broke Hulk's neck to immobilize him, then tried to persuade the incapacitated Hulk that he should side with his future self, telling him that nothing would change when he returned home and he would still be persecuted.

After the Hulk's recovery, the two clashed once more, but despite the Hulk's best efforts, the Maestro was still far too powerful for him. At the last minute, the Maestro was defeated by the use of Doom's time machine, and sent back to the time and place that the Hulk was created: ground zero during the testing of the atomic Gamma Bomb, the only bomb that the Hulk knew the ground zero location of. Appearing next to the bomb itself, Maestro was seemingly killed in the same moment that created the Hulk,[12] but some part of his consciousness still remained, tied to the skeletal fragments at the Gamma Bomb site.

Eventually the Hulk learned that the "homing sense" which had always allowed him to locate ground zero, his "birth" place, was actually attracted to the Maestro's spirit and remains. The Maestro had also been absorbing gamma radiation from the Hulk each time he returned to the site, gradually restoring himself. When the Hulk returned from Counter-Earth,[13] he was radiating vast amounts of energy. Maestro finally absorbed enough radiation to restore himself to life, although in a weakened and emaciated form.

Shortly thereafter, the Maestro's body gradually rebuilt itself, but he nonetheless fainted from exhaustion, and was captured by Asgardian trolls, who placed his soul into the Destroyer to empower it. As the Destroyer, he battled the Hulk, but as the Hulk and Maestro shared the same DNA, Hulk's spirit was able to enter the Destroyer and defeat it by slamming its visor shut just as it discharged a disintegration beam. The resulting shock wave sent both the Destroyer, and the rock it had been standing on, plummeting towards the Maestro, just shown as almost fully recovered, and the latter was covered by the rockslide.[14]

The Hulk briefly titled himself with this alias during a time when shrapnel were lodged within his brain.[citation needed]

It was later revealed that prior to the Hulk's arrival, Maestro had impregnated a woman, who traveled into the past to raise her son away from his father's influence. Maestro's cousin Shulk traveled into the past along with Kaspin to kill the child and end the Maestro's line, but this plan failed when Kaspin killed Shulk with his mental powers.[15]

Seemingly those of the Bruce Banner of Earth-616 but far greater.

Like this? Let us know!
Retrieved from "https://marvel.fandom.com/wiki/Bruce_Banner_(Earth-9200)?oldid=6452018"
Community content is available under CC-BY-SA unless otherwise noted.