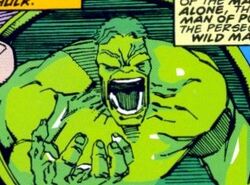 The future history of Bruce Banner is unknown. He was used as a rallying symbol by the Knights of the Banner, a survivalist cult in 2099 who revered the Hulk as the ultimate primal man, unaffected by the trapping of modern civilization. The Knights somehow acquired gamma technology for the purpose of recreating the Hulk among their numbers.[1]

Seemingly those of Bruce Banner (Earth-616)#Powers.

Like this? Let us know!
Retrieved from "https://marvel.fandom.com/wiki/Bruce_Banner_(Earth-928)?oldid=6006535"
Community content is available under CC-BY-SA unless otherwise noted.