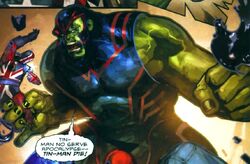 The damage to Banner's brain ultimately caused him to end up with him joining Apocalypse's forces. Apocalypse commented that he was "truly the strongest one there is," an example of which of when he ended up killing an armored Brian Braddock. As result of Braddock's death, however, a vengeful Wolverine decapitated Hulk with his claws.[1]

Seemingly those of the Hulk of Earth-616.

Seemingly those of the Hulk of Earth-616.

Hulk wears a garb resembling that of a modified Archangel uniform worn by Warren Worthington III. Thus it can be assumed that Hulk represents the Horseman of Death.

Like this? Let us know!
Retrieved from "https://marvel.fandom.com/wiki/Bruce_Banner_(Earth-93074)?oldid=5179361"
Community content is available under CC-BY-SA unless otherwise noted.