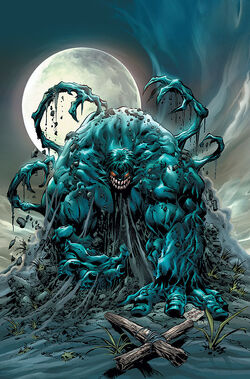 Home Base managed to clone Bruce Banner but dismissed the clone as a failure, believing that he could not transform into the Hulk and sent him after Nadia Dornova, but he was killed by the original Banner. He quickly resurrected and lured Banner away from his companions to kill him and take his place but was ultimately killed in battle and his brain and heart taken away so he couldn't regenerate.[1]

All the abilities of the original Banner.

While the clone had vast levels of superhuman strength, he couldn't grow stronger as he got angrier like the original Hulk.

Like this? Let us know!
Retrieved from "https://marvel.fandom.com/wiki/Bruce_Banner_(Home_Base_Clone)_(Earth-616)?oldid=5824827"
Community content is available under CC-BY-SA unless otherwise noted.