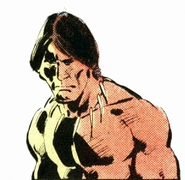 Brule was the chieftain of the Borni, but later began to serve as a Pictish Isles emissary under King Kull of Valusia.[5]

When the City of Wonders was shaken by an earthquake, he helped Kull rescue the survivors. During the war against Zharfaana, Brule slayed the traitorous soldier Emandax.[6]

Brule was against Kull's decision to marry Sareena, as he feared the wedding with the daughter of the Atlanteans's chieftain might be interpreted as hostile by the Picts. He didn't attend the ceremony, so he couldn't protect Sareena from being stabbed to death by a Wolf Man, disguised as an Atlantean. As both Atlantis and the Picts waged war against Valusia, he strenuously fought to push back the invaders from the City of Wonders. When Kull, Lhok-Nor, and Taku defeated the Wolf Man and returned from the catacombs, ceasing every hostility, Brule was ordered to bring five men with axes to free the real Tu, who had been kidnapped by the Demonolater.[7]

During the wedding ceremony held by King Governi of Thule for the marriage of her daughter Elise with Rashver, son of the king of Verulia, Kull picked Brule to challenge Iraina for a friendly tournament and sent him to face her, but he refused to cross spears with a woman. Enraged, Iraina subjected him to a flurry of lightning quick strokes and the Pict's blood flowed. Still, Brule refused to fight her, so she knocked him to the ground and prepared to spear him in the heart. Beseeched by the crowd that the tournament was for amusement only, she spared his life.

Iraina made a gift of Brule's life to Kull because they were of the same Atlantean tribe. Brule stalked off humiliated, and after the festival ended the Pict turned irritable, impatient, and brooding. Kull confronted him, asking if the duel with the tiger wench still weighed on his mind. Brule asserted that Iraina was no mere wench, that there was something dark and inhuman about her. Some days later, Iraina arrived at Kull's capital and arrogantly dismissed Brule. Brule followed the shaman Ram-Os as he slipped away, and discovered the old shaman leading an orgiastic ceremony amongst the warrior women outside the city, beseeching Ja-Quari the Tiger-God for victory in battle. Brule captured Ram-Os as he returned to the city, and interrogated him, learning the tale of Iraina's birth. He then rushed to help his king against the Tigress, and helped him kill Iraina's mate, the royal tiger Kel-Jar.[8]

When Tu was critically injured, Brule was chosen by Kull to seek out the amulet of Ka in the jungles of southern Verulia. He mistrusted Akreon and recognized his treacherous intent, but he was fatally injured by the Valusian traitor. After having killed Akreon, Kull used the amulet of Ka to fully heal Brule.[9]

He attended a tragedy at an open-air theater in Ostium and joined his friend Kull to save the kidnapped senators and exact vengeance against Roc of Lemuria.[10]

When Sedrick told Kull that Beast-Men had stormed the gate, Brule went off to settle the matter but, after he acknowledged Sedrick's betrayal, he came back to kill him. Kull stayed the Pict’s hand, knowing Thulsa Doom's punishment for failure would be worse.[11]

Some time later, when King Kull was missing, Brule fought Thuronolos alongside Conan, who was impersonating the Atlantean monarch.[12]

Brule, the Spear-Slayer became the only god left of his descendants, a party of Picts led by Brogar, and was also known as the Dark God.

His idol was stolen by "evil Picts", who were later slaughtered by the Vanirmen of the Isle of Swords, and found by Conan who pursued them to retrieve his love Mala. The Dark God helped Conan in his battle. The Picts following the thieves attacked at the same moment than Conan, slaughtering the Vanirmen and retrieving the idol.[1]

Brule's lineage rose in the figure of his descendant Bran Mak Morn, king of the Picts, who opposed the Roman Empire's attempts to conquer the British Isles[4] circa 200 AD.[13]

His idol gained or lost weight regarding who tried to handle it.[1]

Like this? Let us know!
Retrieved from "https://marvel.fandom.com/wiki/Brule_(Earth-616)?oldid=5565795"
Community content is available under CC-BY-SA unless otherwise noted.