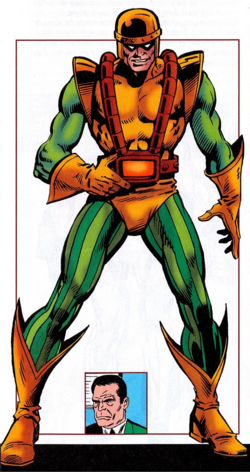 Iron is the most important metal on Earth! By being able to melt it at will, I become the most powerful man in the world!!

Bruno Horgan aka Melter[1] was an American industrialist who specialized in the development of weaponry for the US government. He was driven into bankruptcy when a government safety inspection team proved that he was using inferior materials. His defense contracts were later awarded to his foremost competitor,Tony Stark. He later designed the Melting Ray a weapon that could melt any material.[2] He went on to be a founding member of the Masters of Evil.[3]

Bruno Horgan was an industrialist who specialized in the development, design, and manufacture of weaponry and munitions for the United States government. Horgan was driven into bankruptcy when a government safety inspection team proved that he was using inferior materials. His defense contracts were later awarded to his foremost competitor, industrialist and inventor Anthony Stark, who was secretly the armored crimefighter Iron Man.[2]

As one of Horgan’s factories was being dismantled, the bankrupt industrialist noticed a strange phenomenon. One of his poorly constructed, experimental radar devices had begun to malfunction. Casting a brilliant beam of light, it caused any iron components upon which it shone to begin instantly to appear to melt. Horgan analyzed the device and redesigned it so that it could be strapped to his chest. Equipped with his Melting Ray, Horgan began his career as the Melter by striking at the factories owned by Anthony Stark. He was defeated by Stark, as Iron Man, who would became the Melter’s main nemesis. Finding himself at risk because his armor was also comprised of iron, Tony developed a new suit made out of aluminum. When the Melter's weapon had no effect on this armor, he fled the scene allowing Stark Industries to recover and resume normal operations.[2]

As a member of Baron Heinrich Zemo’s Masters of Evil, the Melter twice battled the Avengers[3], the team of champions to which Iron Man belonged.[4][5] He worked with the team on various crimes.[6][7][8][9][10]

The Melter was also among the costumed criminals who were assembled by Doctor Doom to attack the Fantastic Four on the day of the wedding of Reed Richards and Susan Storm[11].

Later, finding his chest device unwieldy, the Melter redesigned it into a hand-held gun. Still not satisfied, he later kidnapped Anthony Stark and forced him to design a new “melting gun:’ which was far more powerful and was capable of dissolving all metals, as well as affecting human flesh, wood, and stone.[12] Defeated once again by Iron Man, the Melter was returned to prison.[13]

The Melter next fought the Avengers as a member of the new Masters of Evil organized by the robot Ultron. Afterwards, the Melter teamed up with Whiplash (who is now known as Blacklash) and the Man-Bull as members of the criminal Death Squad. The Death Squad fought Iron Man at a large comics convention but were defeated.[14][15][16]

The Melter again redesigned his melting weapon to wear on his belt. Having again proved to be unsuccessful on his own, the Melter teamed up with his former partner Whiplash and another of Iron Man’s long time adversaries, the original Blizzard. The three criminals were financed in reconstructing their weaponry by billionaire Justin Hammer in return for a percentage of the proceeds from their robberies. The Melter, Whiplash, and the Blizzard had the misfortune of staging their robbery of a casino hotel when Anthony Stark happened to be there with his friend, Bethany Cabe.[17] Iron Man and Cabe succeeded in over coming all three criminals, who were sent to the prison on Ryker’s Island. Shortly thereafter, operatives of Hammer freed them and took them to Hammer’s enormous "house boat" base. When Iron Man appeared at the base, Hammer sent the Melter and numerous other costumed criminals to attack him. However, Iron Man quickly returned them to prison.[18]

While in jail, the Melter met a nuclear physicist who had been convicted for tax evasion. Together they developed a method of adjusting the Melter’s melting beam to affect Iron Man’s new armor. After leaving prison, the Melter confidently attacked Iron Man yet again. Unexpectedly, though, Iron Man used one of his oldest armors as a remote-controlled robot as a diversion and managed to knock out the Melter.[19]

The Melter was recruited into the Criminal Defenders team. He single-handedly defeated and knocked out Nighthawk, though his leader Libra decided against further hurting the defeated Nighthawk.[20]

He later came under the employee of criminal mastermind Justin Hammer. Under his orders, the Melter and fellow villains had a series of encounters with Iron Man in an unsuccessful attempt to neutralize the hero.[21][22][23][24] He was defeated again in their attempt to sabotage the company Stark International.[25]

Somehow, though, the Melter was soon back at large. His reputation tarnished by so many humiliating defeats by Iron Man and his Avenger team-mates, the Melter decided to win himself notoriety by killing the Thing, who was then hospitalized, recovering from injuries. A large number of other costumed criminals also tried to kill or capture the hospitalized Thing, but all of them, including the Melter, were thwarted by various costumed champions who acted to protect him.[26]

Despite his long history of repeated failures, the Melter obsessively persisted in seeking vengeance on his enemies. He was planning to attack Iron Man and the Avengers yet again when he was fatally shot with an explosive bullet by the enigmatic assassin Scourge, who was posing as the Melter’s assistant. After murdering the Melter, Scourge contemptuously crushed the Melter’s latest melting beam weapon beneath his foot.[27]

Like this? Let us know!
Retrieved from "https://marvel.fandom.com/wiki/Bruno_Horgan_(Earth-616)?oldid=5725685"
Community content is available under CC-BY-SA unless otherwise noted.