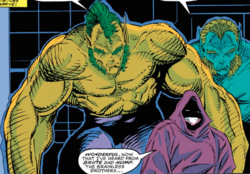 Brute and his brother Hump accompanied Masque in confronting Sabretooth, one of the Marauders from the notorious "Mutant Massacre." They attempted to claim Sabretooth's life, but Caliban seemingly slew Sabretooth before they could do so. Hump and Brute tried to help Masque capture Feral, but they failed and she escaped into the sewers. Brute, Hump, and Masque followed Feral and found her in the X-Mansion. After the New Mutants defeated members of the Protectorate, Masque told them to give Feral back to them but Cable refused. Brute threatened Cable and Cable shot him in the head. Masque and Hump then decided to leave.

He reappeared alive, likely resurrected by the Five. He and his fellow Morlocks attacked the Reavers destroying Lowtown in Madripoor.[1]

Like this? Let us know!
Retrieved from "https://marvel.fandom.com/wiki/Brute_(Morlock)_(Earth-616)?oldid=6486076"
Community content is available under CC-BY-SA unless otherwise noted.