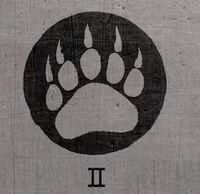 Origin
Super-intelligent cybernetically-enhanced animals who were dedicated to saving the environment.

Project Brute Force, was spearheaded by Dr. Randall Pierce as part of Weapon II.[1] The project was created in conjunction of Multicorp owned by Adam Frost. Frost had plans to create cybernetically enhanced soldiers using animals. Multicorp hoped to use the team as it's own private attack force.[2]

The prototype team Heavy Metal was abducted by "fast food clowns," so Multicorp create Brute Force to retrieve them.[2]

Another of the subjects in the program was designated Weapon II, he was a cybernetically enhanced squirrel with Wolverine like claws. He was captured by Shannon Sugarbaker to be used in her hunting tournament of anthropomorphic animals.[3]

Wolverine and Captain America investigated an abandoned Weapon Plus site where they found the team kept in hibernation tanks full of liquid. The bear was freed from his container and attacked the duo. It was revealed he was being mind controlled by another super-soldier, "Adam". The two heroes were forced to kill the bear in the process.[1]

Retrieved from "https://marvel.fandom.com/wiki/Brute_Force_(Animals)_(Earth-616)?oldid=5300499"
Community content is available under CC-BY-SA unless otherwise noted.