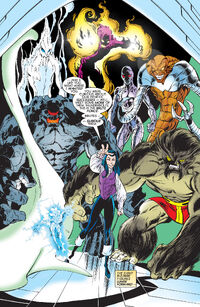 Brute Force was a squad of superhuman agents of the Secret Empire. All Brute Force members were recruited in the same way as their teammate (and later Thunderbolt member) Charcoal. Each member was recruited from a troubled small town or other disenfranchised area of the United States by the Secret Empire under the guise of the "Imperial Forces." During their recruitment, they were medically scanned for certain genetic profiles, and subsequently experimented upon to grant them super powers. Indoctrinated to serve the Elite of the Secret Empire, each member of Brute Force would die to protect and serve their fascist way of life.[1]

Brute Force was called to take down the Thunderbolts when that team had infiltrated the Secret Empire's base. Soon after, they were called to fight them in a gladiator arena, but were defeated by the heroes with the help of USAgent and the Jury, who remanded the Brute Force to police custody.[1]

Retrieved from "https://marvel.fandom.com/wiki/Brute_Force_(Secret_Empire)_(Earth-616)?oldid=5545520"
Community content is available under CC-BY-SA unless otherwise noted.