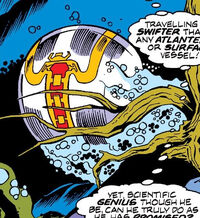 Doctor Doom developed this submarine spherical vehicle[2][1] of 3.048 meters in diameter made of semi-transparent plasteel[1] and sporting the Royal Seal of Latveria as its only discernable feature. In a demonstration of Doom's geniality, the Bubble Ship was propelled by transforming the water pressure into energy, and exceeded the speed of any submarine vehicle, even those built by the Atlanteans.[2][1] The vehicle allowed Doom to communicate with people outside simply by speaking.[2] Doom built one single Bubble Ship, commonly kept under Castle Doom in dry dock.[1]

Retrieved from "https://marvel.fandom.com/wiki/Bubble_Ship?oldid=5287922"
Community content is available under CC-BY-SA unless otherwise noted.