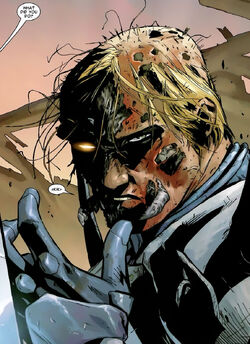 The insects of the island had much to tell me. New York is in danger. We must leave now.

Buck Mitty was the victim of a tightened academic budget at Empire State University, as his Entomology Department was the subject of severe cutbacks. Rather than accept a transfer to another area in the Biological Sciences, Mitty quit. He regretted his decision soon enough, for he was now without the funds necessary to continue his research into our six-legged friends. And so began a life of crime.[6]

His first outing, an attempt to steal several million dollars worth of black pearls, was abortive, as an armed gang of thugs had beaten Humbug to the waterfront. Humbug would have confronted the thieves and taken the pearls if not for the intervention of the hero Spider-Man, whose entrance discouraged Humbug. The next afternoon, Humbug attempted to steal millions of dollars from an armored car, only to be put down by Spider-Man after an unsurprisingly brief fight. Released by a sympathetic judge, Humbug returned to crime, now intending to rob Empire State University. Again, he encountered Spider-Man, and surrendered after Spider-Man threatened to kill a jar of roaches. Remanded to police custody, Mitty served his time and was released.[7]

Buck broke into the American Museum of Natural History the planned to steal a priceless scarab amulet. Spider-Man arrived to stop him and led him to a part of the museum that was damaged by termites, and Buck fell through the floor broken by those termites knocking himself out.[8]

Once again, however, the University cut funding for the entomology department, prompting Mitty to resume his Humbug identity and attacks on the school, targeting the objects of increased funding. The mercenary Deadpool was hired to take care of the problem, and although Humbug succeeded in evading and even temporarily deafening Deadpool, the mercenary caught up with him. Deadpool coated Mitty with honey and doused him with a sample of fire ants. In his panic, Mitty turned his weapons on the ants and fired upon himself, apparently killing himself.[9]

Daughters of the Dragon

After robbing a rich woman alongside other costumed thieves and criminals and mistakenly stealing a dangerous computer virus, Humbug was placed on a hit list and came up against the Daughters of the Dragon who were working as bounty hunters. Ultimately he ended up relying on them for protection and even offered his help in fixing the situation by using his insect spies to aid them.[10]

Humbug reappeared as a member of the new Heroes for Hire because he was trying to redeem himself.[11]

During an adventure in the Savage Land, insects there changed him, giving him a mask he wore over his face, along with a new suit, and increased powers. He acted in a totally different manner after this.[12] He killed a bug alien when back in New York during World War Hulk, in order to cover himself and his teammates with the scent, and then led them onto the alien ship he then abandoned them, going to find the Brood queen, and agreed to be a host for her eggs.[13] When his teammates were to be punished for the death of the bug that only Humbug had killed, he blamed Tarantula, thus sparing the rest, and letting someone he did not like take the blame for his action. Colleen Wing, knowing he had a crush on her, claimed she did it, thinking he would save her, but he asked for them both to be taken, and she ended up being sentenced to death alongside Tarantula.[4]

Later, the mask he wore was separated from him, and turned out to be an insect, an agent of Earth's Hive mind. It had been manipulating Humbug, using him to get to the Brood Queen, and also to collect her eggs. It sterilized the queen, and said that the eggs she had placed within Humbug wouldn't hatch, as Humbug had been altered to be an unfit host before being sent to her.[5]

When Shang-Chi went to rescue him, Humbug begged Shang-Chi to kill him to end the pain he was in as the Brood eggs died within him and told Shang-Chi that he regretted what happened to Colleen, and that he only meant to give them the "mean one." Shang-Chi had developed a close relationship with Tarantula, and upon hearing this, ripped off Humbug's head, killing him.[5]

Like this? Let us know!
Retrieved from "https://marvel.fandom.com/wiki/Buchanan_Mitty_(Earth-616)?oldid=6477567"
Community content is available under CC-BY-SA unless otherwise noted.