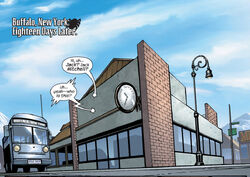 While visiting Buffalo, a young Canadian woman named Melanie met the Purple Man. Using his powers to compel and control her, the two were married within an hour of meeting.[1]

Iron Man battled the Hulk in the Buffalo annex of Stark International.[2]
The Fantastic Four then came to investigate the detonation of the gamma bomb developed at Stark International's Buffalo facility and the disappearances of both Tony Stark and searched for the so called Iron Man and the Hulk, much to Jasper Sitwell's dismay.[3]

Like this? Let us know!
Retrieved from "https://marvel.fandom.com/wiki/Buffalo?oldid=5604099"
Community content is available under CC-BY-SA unless otherwise noted.