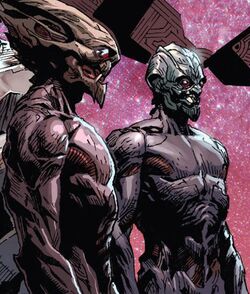 We are very good teachers.

The Builders are said to be the universe's oldest race. "Perfect" beings, they created "systems" to control the structure of space and time, and different races to aid them in their mission.[1] There are two types of Builders, the Creators and the Engineers. Cultivating the universe for billions of years, they seeded worlds and directed the evolution of civilizations. Never had they been conquered. They were created by Captain Universe who saw them as her children.[2] The Builders considered her their mother and used to worship her.[3]

The Builders are said to be the universe's oldest race. As they were "perfect", they molded a path of expansion in which they created "systems" to control the structure of space and time, different races called Alephs, Gardeners, Curators, Abyss and Caretakers.[1]

When Ex Nihilo, a Gardener raised by an Aleph, tried to make Earth sentient, his own creations cataloged the planet as a "failure" after the origin site designated for self-repair was unable to stop it from experiencing incursions, and sent a signal to the Builders,[4][5] who started heading to this planet in order to destroy it and save their universe. Along the way they went about annihilating and conquering other planets in their path.[2][6][7] The main Builder invasion fleet was so large it blacked out a sun.[2] Some worlds were destroyed by the planetoid-sized World Killers, such as Galador.[2] Other worlds were turned into plague worlds by the suicide of a Gardener, such as Whaan Prime.[8]

A resistance conformed by the Galactic Council and the Avengers managed to oppose the Builders, although they still had the odds in their favor. The first attempt to stop the Builder invasion by setting up an trap, turned into a disaster as the Builders had set their own trap resulting in the loss of a third of the Galactic Council fleet within minutes followed by their full retreat.[9] They retreated to the Behemoth Ringworld and their analysis revealed that the main Builder invasion fleet had over 22,000 warships, including 600 Worldships and 12 World Killers. The Builders then sent a kamikaze attack of undetectable sentient drone ships against the Behemoth Ringworld where over a 100 million refugees now resided, killing the refugees and devastating the fleet.[10]

Afterwards worlds began to surrender to the Builders, starting with the Centaurians and then the Kymellians. After a 100 worlds had surrendered, the Kree Empire too surrendered to the Builders weakening the Galactic Council as they represented 1/4 of the fleet. The Spartax then abandoned the war effort. Following the advice of Captain America they setup another trap for the Builders, which was successful this time. Resulting in the capture of two of the World Killers which were used to destroy almost all of the remaining Builder World Killers, forcing the Builders to disengage.[6] The Builder's main force regrouped near the Kree homeworld of Hala, but had lost the last World Killer due to damage it had sustained in the battle. By this time, the Galactic Council had lost hundreds of worlds and half their fleet therefore they were counting on reinforcements from a newly grown Brood horde and an Annihilation Wave to brought from the Negative Zone.[11]

The Galactic Council then sent Thor to Builder-occupied Hala on the pretense of suing for peace, whom liberated the world by slaying the Builder and regaining the Kree Empire as an ally.[12] The Galactic Council followed up the liberation of Hala with victories over the Builders. The Kree liberated the Kymellian homeworld (Kymellia III), the Galadorian Spaceknights freed Centauri-IV, and the Skrull warlords liberated Korm Prime. It was the Shi'ar (aided by the Avengers) who suffered the most casualties in this campaign as they liberated Rigel-3, but lost at Formuhaut and Chize. They then opened a gateway to the Negative Zone and an Annihilation Wave swarm of millions or billions came through but with a gesture a Builder made them devour each other. When Captain Universe arrived to the Builder Command Vessel and started defeating the Builders, the alien entities ordered their Alephs to auto-destroy along with whatever they could take with themselves as the tide of the battle had been turned.[3] After the liberation of Hala, thousands of worlds rose in rebellion against the Builders and aided by the Galactic Council and the Avengers, the Alephs on those worlds were destroyed.[13]

The remaining Builders from every universe had stationed in a Superflow, and worked together in a way to stop the Beyonders, a race of incredibly powerful aliens bent on destroying the Multiverse. They managed to locate one of the Beyonders, and tried to engage in combat, but were destroyed.[14]

The Superflow, described as both a place creatures go to dream and a place connecting all realities.

Like this? Let us know!
Retrieved from "https://marvel.fandom.com/wiki/Builders_(Race)?oldid=5797118"
Community content is available under CC-BY-SA unless otherwise noted.