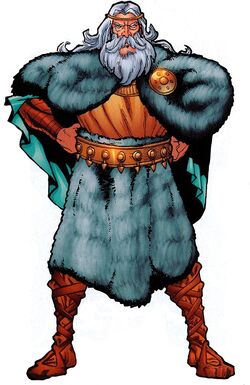 Buri was the first-born of the Aesir who were worshiped as gods by the ancient Viking and Germanic tribes of Northern Europe. In Norse lore, Buri was the third entity to arise in creation, after the giant Ymir and the cow Audumla who found him in Niffleheim.[3]

His exact origin is blurry, with multiple versions:

Intrigued, the Giants allowed Buri to live. Buri grew wise and strong[3] and took a Frost Giantess as wife,[2] and had three sons: Bor, Mimir and Njord.[2]

He was succeeded by Bor after his son bested him in combat, and his other son Njord left to found Vanaheim and sire the Vanir.[2] Bor in turn took a wife (the giantess Bestla) and fathered his sons.[3][4]

As Bor founded Asgard, home of the Aesir, Buri went to live recluse as Tiwaz in the northern reaches of Asgard[7][2], in Nastrond,[8] living among ephemerous servants he created by sculpting ice and animated with life.[7][2]

After Bor's death, Odin challenged and bested Buri as well.[7][2]

During the Aesir/Vanir War, Tiwaz witnessed from afar the death of Mimir (a peace hostage given by Odin), decapitated by the Vanir, and the eventual annexation of the Vanir to Asgard.[2]

He was eventually forgotten by the Asgardians.[2]

After Thor was born, Buri visited him.[7]

He learned about Odin's death, and left footsteps for the grieving Thor to follow. He later discovered him after a brutal battle with Hela and took him and Mjolnir to his home.[7]

He nursed Thor back to health, wrestling with him in friendly matches to test him. Thor once believed him to be Odin, but Tiwaz proved him wrong. The sorcerer also refuted the story told by Odin's Eye about Odin's origin. He returned to normal strength and was able to beat Tiwaz. He then encouraged Thor to return to Asgard, and the Odinson departed Tiwaz's company, unaware that he was in fact Buri. He was directed to Frigga and the children who had went in hiding during Surtur's attack on Asgard.[7]

Thor told Volstagg's children about Tiwaz, and they later fred Hrimhari, Boom Boom and Warlock from an Asgardian prison, sending them to recruit the aid of the Giant-sorcerer.[8]

They had nearly reached Tiwaz's dwelling, when they were caught in a net and captured by a Frost Giant serving Hela. They escaped from the Frost Giant's grasp, and Tiwaz appeared, imprisoning the Frost Giant in a block of ice. Tiwaz brought them into his cave, warmed them up and advised them on the true extent of Hela's threat and of her new sword, able to slay Odin and fell the World Tree.[9]

Tiwaz revealed the location of the Warriors Three and sent Hrimhari and the two New Mutants to free them from Queen Ula and her Savage Swarm of Hive Trolls. Tiwaz stayed behind and watched them. They managed to free the Warriors Three, though it required Tiwaz's magic to shrink Volstagg so that Warlock could fly him away. Later Tiwaz monitored from his home Karnilla's attempt to revive one of her stone-petrified men. She failed, but Tiwaz concentrated the excess magic from her spell to revive all people of Nornheim, still in their stone form.[10] With Tiwaz' secret support, Hela's army was defeated and retreated to Hel.[2]

He later sent an ice-fairy to Asgard, transporting a vial using whose content transformed the people of Nornheim back into men of flesh and blood, and a map allowing the New Mutants to return to Midgard.[11]

His fate after Ragnarök and the return of the Asgardians is unrevealed.[2]

Tiwaz possesses superior attributes to that of a conventional Asgardian god including:

He has vast mystical powers, enough to make Hela shudder at them even though she didn't know him,[9] and can cast spells and manipulate mystic energies even over long distances:[10][2]

Presumably, as the progenitor to the Norse gods, he possessed the same abilities as his grandson, Odin. He is a skilled ice-sculptor,[7] and was worthy of Mjolnir.[7]

Superhuman Strength: He is able to lift 100 tons.[2] He is strong enough to nearly match Thor in a physical wrestling match.[7]

Like this? Let us know!
Retrieved from "https://marvel.fandom.com/wiki/Buri_(Earth-616)?oldid=6076851"
Community content is available under CC-BY-SA unless otherwise noted.