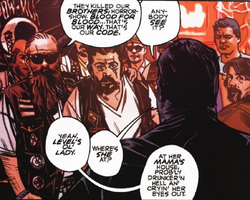 Ram another lord was secretly dealing drugs and murdered several members of the gang, making it look as if Horroshow's meth using son, a drug dealing member of the New Saints was responsible. He wanted to replace Horrorshow and get the gang back into the drug business.

Wolverine tracked down Horrorshow's son, and discovered that he had been supplying Ram with drugs. He also learned that he hated his father and thereby couldn't be "saved" therefore Wolverine told him to disappear and never come back. Wolverine told Horrorshow and the Burning Sons a lie, that his son was dead. He afterwards killed Ram, thereby preventing a gang war.[1]

Retrieved from "https://marvel.fandom.com/wiki/Burning_Sons_(Earth-616)?oldid=5683730"
Community content is available under CC-BY-SA unless otherwise noted.