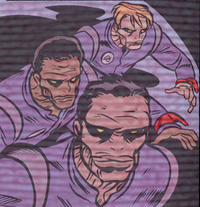 Genetic Metamorph: Thanks to a Replicator Gene, they were allowed to duplicate another humanoid or near-humanoid so accurately that even those closest to them couldn't tell the difference.[1][2][3][verification needed] Unlike the shape-shifting abilities of Mystique, and as Copycat, their morphing seemed to go to the genetic level, where they were able to reproduce Spike's powers.[2][3][verification needed]

Possible Insanity, caused by their powers, according to one of them (It was possibly a false information to perturb the X-Forcers).[2]

Retrieved from "https://marvel.fandom.com/wiki/Bush_Rangers_(Earth-616)?oldid=5073135"
Community content is available under CC-BY-SA unless otherwise noted.