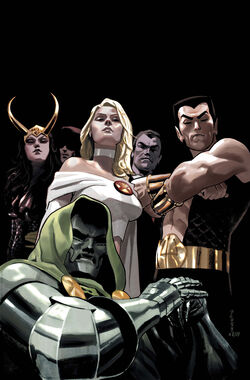 Origin
Formed after the Skrull invasion by Norman Osborn, served as an antithesis for the Illuminati.

Following the Skrull Invasion, Norman Osborn, formerly the villain known as the Green Goblin, was placed in charge of the law enforcement agency formerly known as S.H.I.E.L.D. (now H.A.M.M.E.R.) after he was seen shooting Queen Veranke. The 50-State Initiative fell under the Thunderbolts Initiative, itself under Osborn's control, and Tony Stark was investigated. Osborn took Avengers Tower.[1]

Osborn formed the Cabal, a covert group set against the aims of the scattered Illuminati, made up of Namor of Atlantis, Emma Frost of the X-Men, Doctor Victor Von Doom of Latveria, Loki of Asgard, and the criminal known as the Hood. Under Iron Man's, Nick Fury's and S.H.I.E.L.D.'s watch, the Cabal members' agendas could not be achieved, but Osborn promised to give them all an opportunity to reach their goals.[2]

Frost was recruited because Osborn wanted a telepath and she was the leader of a dying race, as well as former leader of the Hellfire Club. Dr. Doom could forge an alliance between the the U.S and Latveria. The Hood was instructed to have every member of his syndicate register with the Thunderbolts to be assigned to teams. Loki would eventually gain full control of Asgard and Namor could finally mutually cooperate with surface dwellers.[2]

However, as with any "evil" team, there were other deals happening. Namor and Dr. Doom were secretly working behind Osborn's back. They had formed a mutual alliance involving Namor and his people moving to Latveria. Namor and Doom were going to let Osborn's scenario play out, until Doom could strike and gain full control of the land and Namor the sea. Morgan le Fay desperately attempted to convey to Osborn that Doom would betray him, but Osborn showed a lack of concern due to his Iron Patriot suit. [2][3]

Loki, now a female, had been preparing to place "cracks" in Osborn's mental armor to hasten his eventual fall from power, using the Mighty Avengers for such a purpose. Shortly after Thor released all the trapped Asgardians from their mortal vessels, Loki contacted Victor von Doom and struck a bargain, offering the Asgardians a home in Latveria if they banished Thor. The Son of Satan, Doctor Strange, and Doctor Voodoo joined forces to magically purge Dormammu from his vessel, the Hood. Loki visited the severely burned Robbins, revealing to him her desire to use him as an additional instrument to hasten Osborn's collapse, and gave him a "second chance", thus making him indebted to her. Loki, Madame Masque, and the Hood journeyed together to Cuba and located the Asgardian Norn Stones to serve as a new power source for the Hood.[4]

In addition, due to their romantic past, Frost has made a secret deal with Namor, vowing to protect the latter's psyche from Osborn if and when he would betray them, in exchange for Namor swearing an oath to protect mutantkind. Namor and Osborn's own disagreements arose from the Cabal meeting the Atlantean terrorists. Namor's cousin, the Agent of Atlas Namora, attempted to sabotage Osborn and his forces, further weakening their partnership. As the X-Men and Dark X-Men prepared to face off, Emma finally revealed her role as a double agent, hardened through her discovery of Xavier's torture, and defeated the Dark X-Men with Namor's assistance. Namor departed the Dark X-Men. Osborn ordered that Dark Avengers and Dark X-Men to bring him Namor's head and Emma Frost's heart, and to make sure that Summers saw them do it.[5]

After beginning to lose control of his sanity, Osborn has a violent confrontation with Doctor Doom, which results in Doom bombarding Avengers Tower with a bio weapon before resigning from the Cabal. The Cabal is officially disbanded after the Siege of Asgard which results in Osborn's imprisonment.[7]

Retrieved from "https://marvel.fandom.com/wiki/Cabal_(Dark_Illuminati)_(Earth-616)?oldid=5545541"
Community content is available under CC-BY-SA unless otherwise noted.