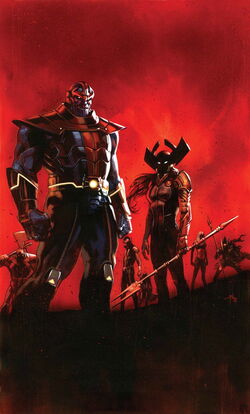 Everything dies. You. Me. Everyone on this planet. Our sun. Our galaxy, and, eventually, the universe itself. This is simply how things are. It's inevitable... And I accept it. What I will not tolerate-- what I find unacceptable-- is going quietly, like some mewling child, before my time. There is something out there, coming for us, trying to kill us all-- And I would do to it what it would do to us. Brothers. Sisters. All the angels have fallen, and we devils are all that remains... So I ask you... Will you help me kill worlds?

The Cabal was formed by Namor after a falling out with the Illuminati due to Namor having destroyed Earth-4290001's Earth in order to save both universes, against the Illuminati's wishes.

When a new incursion occurred immediately after said event, the rest of the Illuminati were ready to let both universes be destroyed, rather than be forced to destroy an Earth. Namor contacted Maximus and freed the prisoners of the Illuminati in Wakanda's Necropolis, told them about the incursions and asked for their help. Together they destroyed the other Earth, and the Cabal was formed[1]

As opposed to the Illuminati, the Cabal decided to make their actions known to the world. Terrax appeared before the United Nations and made their case to the Security Council, informing them that the Cabal was all that was keeping the Earth and the rest of the universe from being destroyed. The U.N. decided to sanction the Cabal's actions, and in return, the Cabal demanded the nation of Wakanda. They proceeded to sack Wakanda, destroying the city-state, and occupying the Necropolis.[1][2]

Conflict soon erupted within the Cabal. Namor, who had gathered them all together, was quickly eclipsed by Thanos, who assumed the leading role. Namor began to tire of the Cabal's methods. Rather than simply detonating the bomb and destroying the other Earth with minimal suffering to its population as Namor wished, the Cabal engaged in wholesale slaughter of the other Earth's population, delighting in inflicting pain and suffering to any that might oppose them. Namor finally challenged Thanos for authority, and even attempted to assassinate the Cabal, to no avail.[3][4]

Namor, desperate to stop the Cabal, sought out the Illuminati once more, ready to turn himself in for his crimes in return for their help. A new incursion was on the horizon, one in which the incursive world had been ravaged by the Sidera Maris. Namor would lead the Cabal to said world, activate the anti-matter injector without their knowledge, and then leave them to die with said Earth by preventing them from escaping with the use of an A.I.M. platform capable of creating an impenetrable barrier between the two colliding Earths. As the Cabal engaged the Sidera Maris in combat, Namor set his plan into motion; however, he was betrayed by Black Panther and Black Bolt, who pushed him off the platform onto the soon-to-be-destroyed Earth.[5]

The fallen Namor pretended he was merely investigating a strange object, and the Cabal immediately understood they were trapped with no way of returning to their Earth. However, they discovered an unusual event was occurring: the Earth they were on was experiencing two simultaneous incursions. The Cabal made their way to the second incursion point, and escaped from the doomed planet into the third universe, Earth-1610, where they encountered the Maker.[6]

The Cabal allied themselves with the Maker, and began preparing with him for the eventual end of everything. Anticipating that the final incursion would take place between their world and the Maker's, they ensured Nick Fury would rally his world to fight theirs, buying them enough time to complete their life raft, which would enable them to survive the end of the Multiverse.[7]

As the final incursion raged, the Cabal were hard at work putting the finishing touches on their life raft, a device designed to allow them to survive the end of the Multiverse, based on the designs of Reed Richards. During the battle between Earth-1610 and Earth-616, the Maker used his Children of Tomorrow to buy additional time for the Cabal to complete their work. They were able to finish their craft before the incursion ended, allowing them to live past the end of everything.[8]

Eight years after the end of the Multiverse, the Cabal's life raft was unearthed on Battleworld, a patchwork planet created from the remains of several universes by Doctor Doom. As they emerged, they killed a Thor, one of the peacekeepers of Battleworld, and learned the name of the world they were on from a local.[9]

The Cabal began wandering the wasteland of Utopolis where they had awoken, making camp to rest and plot a course. While resting, they were attacked by an army of Thors who had come to bring them to justice. The Cabal were more than capable of holding their own against the Thors; however, prompting Sheriff Strange to intervene, along with the surviving heroes of Earth-616 who had escaped the end of the Multiverse in their own life raft. The heroes and the Cabal clashed, and when God Emperor Doom himself arrived, Stephen used magic to disperse all those present and scatter them around Battleworld.[10]

The Cabal were now scattered, with some making their own way on Battleworld and others making common cause with the heroes of Earth-616 in an attempt to overthrow Doom and restore reality to its proper state. During the final, climactic battle against Doom, most of the Cabal were killed.[11] Several have since resurfaced in the reborn Marvel Universe, however.[12][13]

Like this? Let us know!
Retrieved from "https://marvel.fandom.com/wiki/Cabal_(Namor%27s)_(Earth-616)?oldid=6190063"
Community content is available under CC-BY-SA unless otherwise noted.