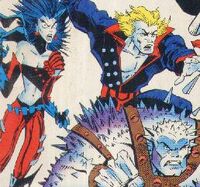 The Cadre are all relative as brothers and sister, and the spawn of the Hellbent Spike and a human woman.[1] They were left abandon at the doors of monastery. The monks there recognized the infants for Hellbent and took them in, raising them as their own kids. After Set slaughtered the monks, templar Chloe Tran sheltered the Cadre into an apartment room behind an abandoned facade and false walls in a seemingly dead tenement just south of the Manhattan riverfront's Alphabet City[2].

Retrieved from "https://marvel.fandom.com/wiki/Cadre_(Earth-616)?oldid=5217286"
Community content is available under CC-BY-SA unless otherwise noted.