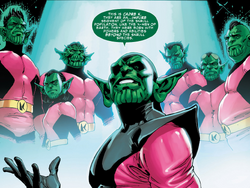 Origin
Mutant Skrulls who carry on the ideas of Professor X's dream to other worlds.

They are an...impure segment of the Skrull population. Like the X-Men of Earth, they were born with powers and abilities beyond the Skrull species.

Cadre K is a group of Mutant Skrulls ("K-class Deviant Skrulls") who were eventually gathered into Cadre K by Charles Xavier, as an equivalent of his X-Men to fight the Skrull Empire, to rescue their kind from being culled at birth, and to agitate for mutant rights.. [citation needed]

Roster includes Fiz, Nuro, R'tee, Spunje, Z'Cann, Goroth all with various powers. A number came in contact with Apocalypse and were forced to serve him during his plot to gain the power of the Twelve. Professor X of the X-Men went into space to train them, giving them the name Cadre K. [citation needed]

Cadre K and Xavier returned to Earth during the Ruul's attempt to overtake the planet by turning it into an intergalactic prison. A wounded Z'Cann attempted to pass on vital information to Rogue. The information was received and the X-Men were reunited with Bishop.[2] Z'Cann was seemingly fatally wounded, but was taken under the care of X-Man Forge and recovered.[3][4]

In a file compiled by Chancellor Kal'du for Veranke,[5] Cadre K was still rejected by the Skrull Empire. They remained unaffected by the massive depowering of Earth's mutants.

At some point, they entered in conflict with Chitauri.[6]

Some time after the Avengers vs. X-Men conflict, the Skrull K'thron came to Earth, kidnapped most of the enemies of Cyclops and Captain America, and informed them that Cadre K had come to Earth in order to take revenge on the meta-humanity for the Skrull defeat during the Secret Invasion. K'thron brought a detector designed to detect those mutant Skrulls, protected from other detectors by their specific physiology.[6]

Cadre K were revealed to not have made any plans for revenge against meta-humanity and had only wished to live in peaceful obscurity on Earth because they had nowhere else to run. The fact their homeworld had been destroyed and they were still being hunted and hated by fellow Skrulls as "Deviants" caused them to flee to Earth disguised as humans in South Dakota due to Xavier's past belief in America being a place where people can succeed because of their differences. They also created a ranch to protect the Skrulls turned into cows by Reed Richards.[7]

Afterwards, the team helped defeat Doctor Doom and destroy his forces in Latveria, but returned to stay at their ranch in South Dakota.[8]

Retrieved from "https://marvel.fandom.com/wiki/Cadre_K_(Earth-616)?oldid=5761835"
Community content is available under CC-BY-SA unless otherwise noted.