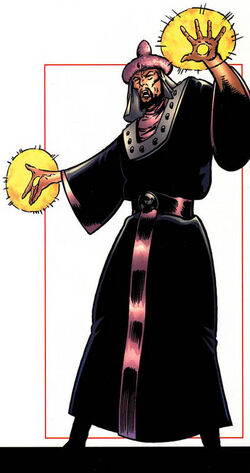 Little is known about the early life of the sorcerer one day known as Cagliostro, not even his real name (although it is speculated to have been O-Bengh).[1]

What is known is that he ruled over a kingdom in India sometime in the year 1000 A.D. During this time, Doctor Doom, who was time-traveling from the present era, was searching for a teacher in the arcane arts. Having gained the respect of Doom, O-Bengh taught Doom his magical secrets. Doom needed this knowledge for his latest attempt to free his mother from the nether-realms. In return, Doom gave O-Bengh a box of jewels that would enable the mage to buy the help and ingredients that he needed for his immortality elixir. O-Bengh was much impressed by Doom's time-travelling abilities and never forgot them.[3] As part of his quest for eternal life, O-Bengh killed the immortal Egyptian wizard Al-Tothas and usurped his form.[1]

By about 1549, Dracula had learned of the existence of the Darkhold. Fearful that the book's fabled Montesi Formula could spell doom for all vampires on Earth, he sent a thief to the Vatican Library to steal it. "Al-Tothas" intercepted the thief on the streets of Rome, killed him, and took the Darkhold for himself. From then on, Dracula vowed undying hatred on the sorcerer.[4] From the Darkhold, "Al-Tothas" learned of an immortality potion requiring the use of vampire blood.[1]

In the 1700s, "Al-Tothas" took Giuseppe Balsamo on as an apprentice, eventually killing him and taking his form and wife, Lorenza. Now calling himself Cagliostro, he became an advisor to |King Louis XVI.[1] In the year 1784, Cagliostro met the hero Captain Marvel who had just passed through the mystical black mirror of Marie Laveau, the Voodoo queen of New Orleans. She was in search of a specimen of vampire's blood, so Cagliostro introduced her to Count Dracula.[5]

During a battle with Dracula, Lorenza was turned into a vampire and Cagliostro left France in search of a cure.[6][7] Unknown to him, his identity would be taken by the time-traveling sorcerer Sise-Neg.[8] Cagliostro was forced to stake Lorenza in 1761 after failing to cure her.[1] Sise-Neg eventually left for the beginning of time in search of power, and Cagliostro returned to Paris. It was there that he found and deciphered Sise-Neg's notes, combining them with ideas he took from the Darkhold and Doctor Doom as the so-called Book of Cagliostro.[1]

Eventually, he traveled to Haiti, and then to New Orleans where he met Marie Laveau. Cagliostro had come to steal her Voodoo secrets, but instead he became her lover. As the price for her love, Cagliostro imparted to her the secret of his own immortality.[9]

With his supply of vampire blood low, Cagliostro realized there weren't as many vampire's available after the reciting of the Montesi Formula seemed to banish all vampires from Earth's dimension. Cagliostro returned to New York, in search of Victor Strange, the brother of the magician Doctor Strange and the first vampire to walk the earth after the Montesi formula. Cagliostro had come to the peak of his powers.[10]

Cagliostro was born with a great talent for sorcery, and he has fulfilled that potential through long years of study and training. He found a way to extent his life in the pages of the Darkhold. In 18th century Earth he was one of the most powerful and skilled magicians around.

Cagliostro has the ability to tap this universe's infinite store of ambient magical energy and manipulate this to a variety of effects. The skill derived from three major sources: personal powers of the mind/soul/body, powers gained by tapping the universe's ambient magical energy and employing it for specific effects, and, finally, powers gained through the tapping of extra-dimensional energy by invoking entities or objects of power existing in tangential mystical dimensions. (The latter means of power is usually gained by reciting incantations.) Some of these effects include:

Aside of the above mentioned manipulations he had been known to use spells capable of opening dimensional gateways, levitating, creating life-like illusions, and mesmerizing others. It is known that at times Cagliostro had access to the evil spellbook known as the Darkhold from which he derived the formula for immortality through the blood of vampires. The volume known as 'the book of Cagliostro' is in fact not by his hand, but derived from notes written by the sorcerer Sise-Neg during the time that he was impersonating Cagliostro in 18th century Paris.

Like this? Let us know!
Retrieved from "https://marvel.fandom.com/wiki/Cagliostro_(O-Bengh)_(Earth-616)?oldid=6513336"
Community content is available under CC-BY-SA unless otherwise noted.