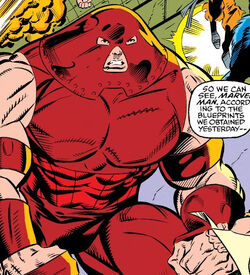 Juggernaut was a member of the Mutant Liberation Front who was one of the taskforce aimed at sneaking into the Sphinx's base. When they took down the force field for a time, Juggernaut was injured when the force field turned back on. He helped tackle the Avengers so they could destroy the generator of the field and then continued to attack when Sphinx herself joined in the battle.[1]

Like this? Let us know!
Retrieved from "https://marvel.fandom.com/wiki/Cain_Marko_(Earth-9105)?oldid=5493785"
Community content is available under CC-BY-SA unless otherwise noted.