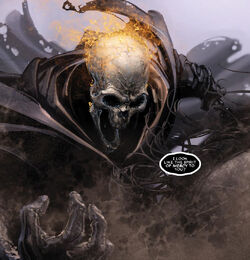 Caleb was a former slave who purchased his and his wife's freedom sometime before or during the American Civil War. After one battle between Confederate and Union forces, he discovered the injured confederate lieutenant Travis Parham and nursed him back to health. Instead of leaving to return to battle, Travis stayed with Caleb and his family for two years helping around the farm. After the end of the war, he left and traveled to the frontier. After Travis left, he and his family were attacked and brutally killed by George Reagan and his gang since they felt superior to Caleb.[1]

Two years later, Caleb returned from the dead, having been brought back by some form of Spirit of Vengeance. He killed three of the Dragwells and the fourth member rose from the dead before bursting into flames at Caleb's hand. At the same time, Travis also returned and the pair both began tracking down Reagan's gang for Caleb's murder. [2]

Between the pair, Reagan's gang were all killed one by one, with Caleb trying to kill Reagan himself and stopping Travis. However, Reagan killed himself before he could do so.[3]

Unbeknownst to them, Reagan made a deal with an unknown entity to return his gang back as seemingly unkillable monsters. The town of Snyder fell under siege by Reagan and his undead gang and Travis was confronted by the group and they ripped off his arm. They dragged him and everyone else into the town just as Caleb appeared to kill the gang again. [4]

The Rider killed nearly all the gang members, but they threatened to kill Travis, forcing the rider to revert back into Caleb. Caleb tried to get Travis to flee but he ignored him and was brought into the demonic plane alongside Caleb and Reagans gang. Caleb revealed how he was turned and told Travis his soul was damned and it was the quest for vengeance that both of them had sought which brought the pair to this place.[5]

It could be assumed Caleb possessed all the powers and abilities as every other individual who called themselves Ghost Rider. There are capabilities Caleb portrayed that weren't seen by other known Spirits of Vengeance.

Caleb was a skilled horseback rider.

Caleb's costume was fitted with a chain, and it can be assumed he could have employed it as a weapon.

Caleb rode on a stallion engulfed in flames.

Like this? Let us know!
Retrieved from "https://marvel.fandom.com/wiki/Caleb_(Earth-616)?oldid=5746614"
Community content is available under CC-BY-SA unless otherwise noted.