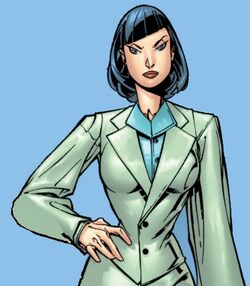 Calista Hancock's relationship with Tony Stark began when he gave up his fortune and worked under the alias Hogan Potts. She hired him to work at her company Askew Electronics. The company was attacked and she was forced to declares bankruptcy. However she later found out he was really Tony Stark and broke up with him never to be seen again.[1]

Like this? Let us know!
Retrieved from "https://marvel.fandom.com/wiki/Calista_Hancock_(Earth-616)?oldid=5217305"
Community content is available under CC-BY-SA unless otherwise noted.