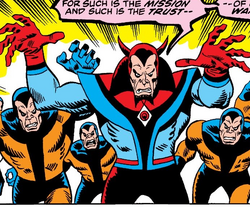 Calizuma and his warrior wizards found a valley in the Himalayas and altered their appearance to seem as man-apes, to attract there the Silver Surfer. While he thought he was teaching them, they were subtly penetrating and controlling his mind, in order for him to serve the Undying Ones. Calizuma was eventually defeated by the Defenders, who took him down by striking him with all their power at once[1].

He was a magician powerful enough that it took all four original Defenders to defeat him. He is a skilled illusion-caster and could project mystical bolts of energy from his hands among other abilities.

Like this? Let us know!
Retrieved from "https://marvel.fandom.com/wiki/Calizuma_(Earth-616)?oldid=4031508"
Community content is available under CC-BY-SA unless otherwise noted.