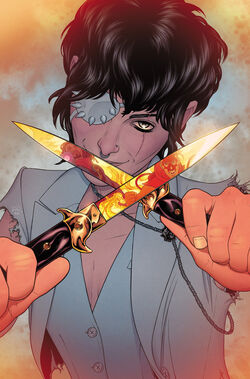 I wore this vest on the day I founded the community of ungrateful monstrosities. It seems only fitting I wear it -- when I destroy them.

When Callisto was young and beautiful, her life seemed so perfect, so enviable. But catastrophe struck her, as she learned that living as a mutant would not be easy. She was blinded in the right eye and was left horribly disfigured. Forced to hold up a mirror to her new reality, Callisto realized that society had little use for a mutant, especially one who was beautiful no more. Scared and alone, she rebelled against society and decided to go underground where it was safe and where she could escape prying, peering eyes. She quickly made a huge abandoned military tunnel called "the Alley" built underneath Manhattan in the 1950s her home.

With help from the mutant-detecting Caliban, the devoted Sunder, and the treacherous Masque, she organized a community of mutant outcasts called the Morlocks who lived in the Alley. (Unknown to Callisto, the Morlocks' existance was orchestrated by the extradimensional sadist called the Dark Beast, a twisted alternate version of Hank McCoy.)

In recent years, Callisto, apparently driven to irrationality by her responsibilities, abducted the winged Angel as a consort. Angel's X-Men teammates invaded the Alley but were captured as well. The team's leader, Storm, challenged Callisto to trial by combat, almost killing her and winning the mantle of Morlock leader.[4]

Over time, the ties between the X-Men and the Morlocks grew closer, the two teams constantly confronted and helped each other.[5] Callisto's rivalry with Storm was changed as they teamed up to fight against Kulan Gath. Initially hating Storm, Callisto, de facto leader in Storm’s absence, grew to respect Ororo and the X-Men.[6] The Morlocks and the X-Men worked out an even higher sense of mutual respect when the X-Men founder, Professor X, had his life saved by Callisto after a beating by anti-mutant protesters.[7]

Callisto and her growing band of outcasts became the victims of a massacre, orchestrated by Mister Sinister and implemented by his team of Marauders.[8] The few survivors, including Callisto, were treated by Moira MacTaggart on Muir Island, Scotland; in gratitude, Callisto appointed herself MacTaggart's bodyguard[9] and assisted Cyclops against the mutant-hating Master Mold.[10]

However, she was captured by Masque, who had, via the young telepath Brain Cell, enslaved the remaining Morlocks. To taunt her, Masque restored Callisto's long-lost beauty, controlled her through Bliss's powers, then freed her in New York City, forging a super-model career for her to torment her.[11] However, the former X-Man Colossus, without his memories, helped Callisto to get free from Masque.[12] Shortly after, Callisto and Colossus parted ways when the Shadow King psychically manipulated Colossus into becoming one of his slaves.

When Masque was believed dead, the remaining Morlocks went mad and attacked Callisto, demanding her to come back as their leader. Callisto and her fellow Morlock, Healer, escaped alive, though severely injured, and sought the X-Men’s aid. At the X-Mansion, the Healer used his last forces to heal Callisto, sacrificing himself, the process was successful, but returned Callisto to her scarred appearance.[13] Mikhail Rasputin, Colossus's brother, convinced Callisto to join him in destroying the Morlock Tunnels and killing themselves and the remaining Morlocks.[14] However, Mikhail managed to transport himself, Callisto and the Morlocks to the Hill, a dimension of rapid time passage. There the survivors, including Callisto, built a new society based on survival of the strongest. The younger generation escaped to Earth as the terrorist unit Gene Nation. Callisto followed the Gene Nation back to Earth and again recruited the X-Men to stop her wayward charges, whom she later tried to rehabilitate in the Alley.[15]

When the government anti-mutant persecution increased, Callisto and her protégé Marrow attacked official Henry Gyrich but were held off by Spider-Man, who in turn helped them battle Prime Sentinels. Severely wounded, Callisto was cared for by Marrow, who had become an X-Men. Callisto frequently insisted that Marrow should take hold of this opportunity and be in peace with the X-Men, she would even team up again with her longtime rival, Storm, to help Marrow adjust to her new life. Callisto was finally cured, by the efforts of the Dark Beast, who had plans for both her and Marrow concerning the X-Men.[16]

Callisto resurfaced as a mutant gladiator in a mysterious revamped version of the Arena in Tokyo. Her body given tentacles by a surviving Masque, who intended to torment her one more time. However, when Storm was pressed into Arena performance, Callisto joined Storm and her allies to topple Masque. Masque attempted to bargain for his life by promising to change Callisto back to her perfect appearance. Callisto refused, alleging she was perfect the way she was, apparently coming to terms with her looks.[17]

Callisto was put in charge of the Arena. However, at Storm's request, Callisto joined Professor X's efforts to rebuild the decimated nation of Genosha. As a member of his informal inner circle, the Genoshan Excalibur, Callisto provided an alternative perspective to Professor X and Magneto's views. As part of the Genoshan group, she has fought Trolls, the Weaponeers, and other threats.[18]

In the aftermath of M-Day, Callisto was among the many mutants who lost her powers,[19] her mutated arms/tentacles were also lost. Still in Genosha, she was seen self-hurting, when found by Quicksilver who offered her the Terrigen Mists, stolen from the Inhumans, as a way to restore her powers. Callisto willingly accepted the offer and the Mist effectively restored all her previous abilities (minus her disfigurements and arm-tentacles). Without any control over her powers, her new senses were so acute that even a drop of rain caused her tremendous pain.[20] She was taken to the Victoria Hospital on Mahé Island in the Seychelles by the newly repowered Hub, helping the Inhumans to find the trail of the mists, using intel provided by the Fantastic Four. Eventually her heightened senses wore off, leaving her powerless again.[21]

Callisto eventually returned to America and joined the terrorist group X-Cell, formed by other depowered mutants who believed that the government was responsible for the M-Day.[1] She attempted to warn them and other mutants not to accept Quicksilver's offer to re-power them by using the Terrigen Mists, but only managed to convince her fellow Morlock Marrow from foregoing the Terrigenesis. When Layla Miller arrived with proof that Quicksilver and the Scarlet Witch had caused M-Day, the pair of Morlocks battled Pietro and eventually fled through the sewers as X-Cell was falling apart.[22]

Callisto relocated to the tunnels below Manhattan and minded her own business until teenage runaways started showing up in the subways. She decided to bring them in with her and give them a home with her. Thinking that a recent runaway called Angie was kidnapped, Storm went looking for her to the sewers. Callisto confronted her and Storm forced her and the runaways to their home when she learned the truth. Storm helped them clean the mess she made, charged their back-up batteries and told her that Nightcrawler would deliver a water purification unit. Before leaving, Storm confessed to Callisto that despite their history she knew the kids were safe with her.[23] Callisto and Angie later saw the global aurora Storm made as a tribute to the recently deceased Wolverine while getting groceries.[24]

Due to the appearance of the race-threatening phenomenon of the M-Pox, the amount of mutants living underground increased significantly. In addition to the mutants, Callisto also welcomed humans who were scared of the global landscape. Working together as the embodiment of Charles Xavier's dream of human and mutant co-existence, this group of mutants and humans lived together as the New Morlocks.[25]

Not long afterwards, Callisto was captured and started serving time as an inmate at the Robert Kelly Correctional Facility for mutants.[26] It is unclear if her mutant abilities came back by this time.

Callisto was eventually welcomed to the new mutant island of Krakoa, created by Xavier, Magneto, and Moira X. She entered through the teleportation gateway alongside other villainous and fractious mutants, who had been invited to join the nation in order to heal mutantdom and start over as a whole species together.[27]

As a Krakoan citizen, Callisto was asked by Emma Frost to join the Hellfire Trading Company as their White Knight, acting as an ambassador for Emma to deal with distrustful mutants. Callisto received a white suit designed by Jumbo Carnation as she accepted her new position and gave him one of her knives in exchange. As the White Knight, Callisto was then assigned to Island M tasked to welcome the Marauders and several mutants they had rescued. Using the money she had received from her missions for the Hellfire Trading Company, Callisto was then able to afford a life of luxury for Morlocks such as Masque.[28] Callisto would later undergo the Crucible and die at the hands of Storm. As a result, she was revived by Krakoa's resurrection protocols with her powers returned.[2]

Callisto is a natural-born leader, huntress, and fighter skilled in virtually every form of hand-to-hand combat and weapons usage.

Callisto possesses the normal level strength for a woman of her height, weight and build, who engages in regular exercise.

Bo-Staff: Callisto took to employing a fighting pole with a mounted blaster installation as a personal armament.[15] She would later modify it to absorb and rechannel electrical discharges in the event of encountering Ororo again.[23]

Body Armor: In her time on The Hill, an extradimensional expense ruled by Mikhail Rasputin, Callisto took to adorning protective guarding.[15]

Holographic Pictograms: Special computerized spheres that act as recorders/projectors which streamline detailed information about subjects from the Hill dimension.[15]

Rifle: Upon her return trip from The Hill the Morlock Leader took to employing high powered offensive batteries in her fighting style, until one blew up in her face due to Storms caste lightning.[30]

Taser: Callisto once used a stun gun for a time when confronting kitty about her wedding to Colossus.[31]

Like this? Let us know!
Retrieved from "https://marvel.fandom.com/wiki/Callisto_(Earth-616)?oldid=6419954"
Community content is available under CC-BY-SA unless otherwise noted.