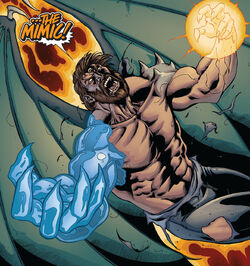 One of the government agents (alongside Nuke and Agent Barnes) sent to Genosha to kill Magneto and as many of his followers as possible. He and Mimic served as a distraction while Agent Barnes sneaked into Magneto's headquarters. Mimic himself engaged Magneto in battle.[1]

Power Mimicry: Mimic possesses the superhuman ability to copy the powers of any Mutant.

Mimic copied the powers of every Mutant on the Republic of Genosha (or so he claimed) whilst he was fighting Magneto, the shown mimicked powers consisted of;

Like this? Let us know!
Retrieved from "https://marvel.fandom.com/wiki/Calvin_Rankin_(Earth-58163)?oldid=5409679"
Community content is available under CC-BY-SA unless otherwise noted.