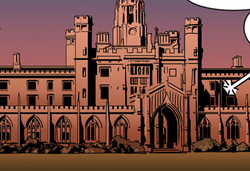 University of Cambridge is a collegiate research university located in Cambridge, Cambridgeshire England. It was founded in 1209 A.D. after a dispute between academics at Oxford University. These two university's are often referred to as "Oxbridge".

Sir Isaac Newton was an English physicist and mathematician who is widely recognized as one of the most influential scientists of all time and as a key figure in the scientific revolution. He studied at Cambridge University before he was recruited into the Brotherhood of the Shield.[1]

Charles Darwin the naturalist attended Cambridge University were he presented compelling evidence that all life on Earth had evolved from common ancestor. His theory of evolution had become widely accepted by the time of death.

Gulliver Jones was one of Britain's finest scientific minds, a former classmate of computer pioneer and code breaker Alan Turing at Cambridge University.[2]

Professor Stephen Hawking studied cosmology at the Cambridge University, he was diagnosed with Amyotrophic Lateral Sclerosis.

Clive Reston was a graduate of Cambridge University where he mastered in Chemistry.[3]

Tony Stark attended the University of Cambridge. At a party her approached a girl named Cassandra Gillespie When they begin to talk, the situation at the party escalates, and during a scuffle, Tony and the girl flee, leaving the girl's bodyguards behind. The two young adults run away, and the girl introduces herself as Cassandra Gillespie. The bodyguards catch up to them, taze Tony, and take Cassandra, as part of their objective to follow her mother's orders. The following day, Tony encounters Cassandra during a lecture. Later that day, they have launch together. Cassandra's mother is a business rival of Tony's father, Howard. After discussing Tony's relationship, or lack thereof, with Howard, Cassandra invites him to have dinner with her family, to which Tony agrees. Later that night, Tony meets Cassandra's family. At the end of the evening, a Hydra humvee appears on the scene, and a handful of Hydra agents engage in a shootout against the Gillespies' bodyguards. One of the Hydra agents manage to get close to Cassandra's mother and point a gun at her head. Tony takes a gun from one of the fallen terrorists, sneaks up on the Hydra agent and shoots him. Another Hydra soldier shoots at Tony and injures his shoulder, Cassandra protects Tony and shoots his attacker. The police soon arrive, while Cassandra and her mother are okay, her father has died.[4]

A lecture was given on what the true definition of a "Terrorist" is. He argues that the governments of the world have twisted the word and says if the leaders of the world ever want to learn the true meaning, they have only to look in the mirror.[5]

Dr. Victor von Doom teleported Tony Stark away from the ruins of Stark Tower against his will to Cambridge University. Victor took him to the lab of Dr. Amara Perera. As soon as Tony calls for Amara, Victor teleported away. Shocked by Tony's arrival, Amara revealed that Victor had set her up in Cambridge and kept her off the grid. Tony tried to get back with Amara, but she's notably upset at him for having faked his death to everyone, even her. Amara asked Tony to leave as he tried to talk to her, and even confessed his love to her. When Tony tried to open up to her and tells her that Rhodey has died, she sarcastically comments if he's sure of that. Angered by her remark, Tony left, even after Amara tried to apologize.[6]

Doctor Doom traveled to Cambridge University to visit Dr. Amara Perera's laboratory to check on her research. They discussed Tony Stark's recent death. He told her that he wished to reform to make up for his past sins. Amara asked him what he wanted from her, and he simply replied she reminds him of someone before teleporting away. She was then approached by The Thing of the Fantastic Four, now an agent of S.H.I.E.L.D. who is investigating Doom's whereabouts.[7]

Professor Leonard Williams alias Tyrone Cash was originally a brilliant British scientist, working at Cambridge University. He was working on a version of the Super-Soldier Serum when Bruce Banner joined his team. Like Banner, Williams hated his body, and like Banner, Williams had his own agenda for wanting to perfect the process. Once the serum was completed, Williams took it, and went from Banner’s mentor to his predecessor as the Hulk. He killed several people and escaped from the university, and has been on the run ever since. He abandoned his old life, allowing everyone to believe he was dead, using his incredible intellect to evade capture for sixteen years. [9]

Like this? Let us know!
Retrieved from "https://marvel.fandom.com/wiki/Cambridge_University?oldid=5714524"
Community content is available under CC-BY-SA unless otherwise noted.