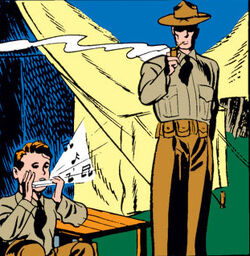 Located in the state of Virginia,[3] Camp Lehigh is a now abandoned base that was operated by the United States Army predominantly during World War II. It was also where in 1941, the United States military planted their operative Steven Rogers, secretly the super-soldier Captain America, when not on missions. When company mascot James Barnes discovered Captain America's true identity, he became Cap's sidekick, Bucky. Many of Captain America and Bucky's first adventures took place on or near the base.

Posing as a constant bumbler Steve Rogers was under frequently scrutinized and was often assigned demeaning tasks by his Sergeant Mike Duffy. Duffy considered Rogers one of the most incompetent individuals he had ever met, and was apparently oblivious to Roger's double identity.[4]

Since Steve Rogers was posted at the camp, it soon became a regular target of Nazi spies and saboteurs seeking to hamper the United States even before it decided to enter the war. Early attempts by Nazi operatives Rathcone,[4] the Wax Man,[5] the wartime Circus of Crime,[6] and the Red Skull[7] to eliminate high ranking officials at the base were all thwarted by Captain America and Bucky. Later the French traitor Pierre Dumort targeted Camp Leigh while posing as a Free French resistance fighter on a State visit. He replaced blank rounds intended for war games with live ammunition hoping that the soldiers participating would wipe each other out. This plot was also stopped by Captain America and Bucky.[8]

In 1942, the camp was infiltrated by the Nazi Squad of Mystery who posed as American soldiers in the hopes of undermining the public's faith in the American military. This plot was ruined by Captain America and Bucky, who rescued the captured American soldiers the spies had replaced.[9] American traitor Captain Rod Elliot allied himself with the Nazis shortly afterword and as the Yellow Claw, he assassinated a number of high ranking military officials stationed at the camp until he was stopped by Cap and Bucky.[10] The Camp was also targeted by Imperial Japan, who sent their agent the Vampire[11] to assassinate military officials, and the Paw who struck at the base from Japan using his Makado Super-Shell cannon.[12] In both instances, like with the others, these attacks on the base were thwarted by Captain America and Bucky.

Due to further the increasing involvement of American soldiers in the war, often the troops of Camp Lehigh were deployed to the various conflict zones around the world. As such, by 1943 the number of attacks on Camp Lehigh saw a dramatic decrease. During that year, military brass at the Camp were targeted by such Nazi operatives as Dr. Crime,[13] the biologically engineered Killer Beasts[14] and the Vulture and his Batmen.[15] 1944 saw one of the rare, non-Axis related attacks on the Camp. During war games, the soldiers of the camp crossed path with insane botanist Doctor Botan and his plant men, who were ultimately destroyed by Captain America and Bucky.[16] In 1945, ranking military officials were murdered by the terrorist known as Black Hand until he was stopped by Captain America and Bucky.[17] When Steve Rogers and James Barnes went missing in action and were presumed dead in 1945[18], their positions at Camp Lehigh were replaced by William Nasland and Fred Davis Jr.[19] who posed as Rogers and Barnes at Camp Lehigh[20] until the Camp was decommissioned after the war.

On Earth-199999, Camp Lehigh became a training ground affiliated not only with the U.S. Army, but also the Strategic Scientific Reserve. It was here that Steve Rogers was tested prior to receiving the Super-Soldier Serum.[21]

In the years after the war, the SSR maintained at stake in the camp, even through their transition to S.H.I.E.L.D. several years later. By the early 1970's, S.H.I.E.L.D. had constructed an expansive underground complex, hidden beneath a bunker, and this was discreetly maintained by a Hydra conspiracy growing within S.H.I.E.L.D. It became the base of operations for the Hydra scientist Arnim Zola, who used it to further Hydra's plans.[22]

Like this? Let us know!
Retrieved from "https://marvel.fandom.com/wiki/Camp_Lehigh?oldid=6522535"
Community content is available under CC-BY-SA unless otherwise noted.