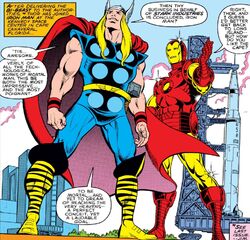 Cape Canaveral is a cape in Brevard County, Florida, United States of America, near the center of the state's Atlantic coast. From 1963-1973 the area was named "Cape Kennedy" after former president John F. Kennedy.[2] It is home to the Cape Canaveral Air Force Station. Many spacecraft have been launched from both the stations and the Kennedy Space Center on the adjacent Merritt Island, the two are sometimes conflated with each other.[3][4]

Mar-Vell maintained a secret identity and worked at "The Cape" for an extended period time.[5]

As soon as Rick Jones learned that the Hulk was in New York, in order to get there, he took on a job to drive a car to the city for a man who advised him not to look in the trunk of the car.[6]
As General Ross, his daughter Betty and Major Talbot attended the launch of the Orion Missile from the Cape in order to test it over the Atlantic Ocean, the man who hired Rick was tracked down and arrested. Accused of being a spy, he activated a remote that caused the device in the trunk of the car that Jones traveled in to turn into a robot, which made the Orion Missile change directions and head towards New York City.[7]
The missile control then watched the Orion change its course again, overshooting the city, and suspected someone was guiding it.[8]

Sometime after, the Avengers and Rick Jones took Captain Marvel to an understaffed hospital in Cape Kennedy, hoping that Dr. Donaldson would cure a strange form of radiation he absorbed in the Negative Zone. Thanks to the Vision solar power, the doctor managed to save Mar-Vell's life, but the two were rendered unconscious. Meanwhile, the Kree Sentry #459, which was held under military surveillance at the Cape, was revived and fought its way into the hospital room where Mar-Vell was being kept.[9]
During the ensuing battle, the Sentry's mission changed to capture Mar-Vell and initiate plan Atavus, eventually managing to teleport away with Mar-Vell as its prisoner. Reporting the incident to Carol Danvers, the Avengers made their leave to search for Mar-Vell.[10]

During a televised event in Cape Canaveral supervised by General Ross, Xemnu sent a message coercing the children who were watching him on television to follow him to his home planet, but his plans were ultimately thwarted by the Defenders with the help of Jim Wilson and Ex-Col. Calvin Beame, who died in the effort.[11]

Like this? Let us know!
Retrieved from "https://marvel.fandom.com/wiki/Cape_Canaveral?oldid=5799372"
Community content is available under CC-BY-SA unless otherwise noted.