As several Stark Industries plants were being sabotaged, a rumor was started that suggested Stark was working with the Communists to waste military resources on projects that will never be completed.[1]

Stark was called again to Washington, D.C., where he had to explain to members of the Defense Appropriation committee that he had been unable to deliver a reliable product due to the acts of sabotage perpetrated by the Melter. Several of the senators even doubted the existence of the Melter.[2]

When the three-dimensional images of the Avengers, projected by Count Nefaria, publicly proclaimed that they were going to seize control of the United States, at the Capitol Building complete mobilization was ordered to prepare for war against the superheroes.[3]

Stark raised once more the Armed Services Committee's attention when he was considered insane by the press, urging Senator Harrington Byrd to demand that Tony Stark would be stripped of all defense contracts affecting the national security.[4]

Iron Man was attacked by Titanium Man to prevent him from testifying before the Congress, and the ensuing battle was looked on by Senator Harrington Byrd from his congressional office window.[5]

Many years later, at the United States Senate, during the hearing over mutants, Senator Robert Kelly was questioning Moira MacTaggert when the X-Men arrived in their civilian guises to inform Professor X about what Kate Pryde just told them. Just then, the Brotherhood of Evil Mutants smashed through the wall and before they could attack Kelly and the others, the X-Men changed into their costumes and stepped in their way to stop them.[6]

Using her mutant powers, Storm created a wind that blew the Brotherhood and X-Men outside of the Senate, building where their battle continued onto the Great Mall.[7] 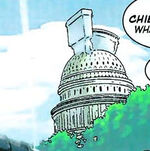 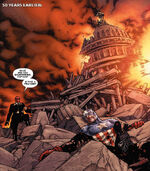 On Earth-807128, the Capitol Building was destroyed during the final battle between Captain America and the Red Skull. It was the site of Cap's death.[9]