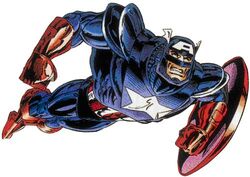 When Captain America was completely paralyzed by his Super-Soldier Serum-induced illness, Tony Stark supplied him with this exoskeleton that allowed Captain America to continue his crime-fighting career. Due to his paralysis Rogers had to have sensors implanted in his body to operate the suit. Stark designed this armor to suit Cap's propensities toward minimizing harm to opponents. Consequently, the primary weapons were Mylar sheaths and disruption beams that caused the targets to suffer vertigo. In addition to these abilities the armor had a set of the magnetic gloves and four miniature anti-missile missiles. The mini-missiles were hidden in retractable launchers in the armor's forearms. This armor looked like a metallic version of Cap's usual costume.

With the World War Hate, Steve, lacking his Super-Soldier Serum and no longer known as Captain America, opted to wear this armor once more in order to defend himself and the reformed, white-headed Red Skull from the Avengers that were hit with the Inversion Spell.[1]

Like this? Let us know!
Retrieved from "https://marvel.fandom.com/wiki/Captain_America%27s_Exoskeleton?oldid=6432233"
Community content is available under CC-BY-SA unless otherwise noted.