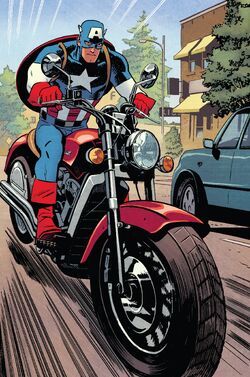 Captain America's most recognizable vehicle, is a custom Harley-Davidson motorcycle. Captain America while living in Brooklyn Heights stored the motorcycle in a service garage operated by Richard Dumbrowski. Captain America often kept his motorcycle in his van and took it wherever he traveled. The cycle suffered a head-on collision[1], but apparently was restored to service.[citation needed]

Captain America has continued to use motorcycles on numerous adventures. Most recently, it was revealed that he stored a motorcycle on the roof of his Brooklyn apartment[2]. This particular motorcycle does not have the distinctive red, white, and blue paint job of the one created from him by Jonathan Coulson. It is undetermined if Cap's present motorcycle is the original custom Harley-Davidson from Coulson.[citation needed]

Like this? Let us know!
Retrieved from "https://marvel.fandom.com/wiki/Captain_America%27s_Motorcycle?oldid=6434260"
Community content is available under CC-BY-SA unless otherwise noted.